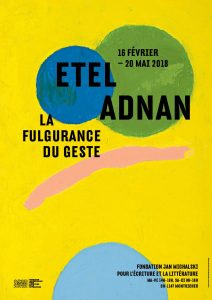 The Lebanese-American poet, philosopher and artist Etel Adnan was born in 1925 in Beirut. Her mother was Greek, her father Syrian. Adnan was educated at French schools in Lebanon and studied philosophy at the Sorbonne in Paris and Berkeley and Harvard in the United States. This and long stays divided between a number of countries over the years gave rise to a cosmopolitan woman who is at ease in several languages. A spirit forever wary of settling down, an eminently free figure committed to feminism and the peace movement, Adnan has been writing and painting since the 1960s.

Over the course of a career that has a foot in both Western and Eastern cultures, her work has embraced a multifaceted formal range that includes poems, essays, paintings, videos, leporellos (fold-out accordion books), calligraphy, tapestries and more, and at the start of them all there is the same gesture, the explosive moment of epiphany, a creator of immediate poetic images produced in a single burst of inspiration. “My paintings and drawings are a celebration of the world,” Adnan points out, celebrations in which colors applied directly from the tube or using a palette knife allow her to express “a certain joie de vivre,” while her writing, from Sitt Marie-Rose (1977), L’apocalypse arabe (1980), and Voyage au Mont Tamalpaïs (1986) to Saisons (2008) and other texts, translates a meditation on the darker aspects of life.

Etel Adnan │ La fulgurance du geste (Etel Adnan / The Dazzle of the Gesture) invites us to explore, through a collection of painted, drawn, woven and engraved works, the idioms of an artist who offers us her sensitive and incisive view of the world in words, lines and patches of color.