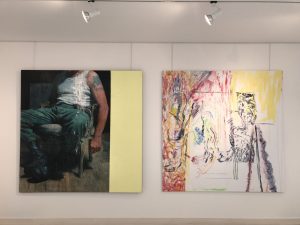 When the Herman Krikhaar Foundation proposed François Bard to exhibit at our foundation, his first reaction was to signal his agreement and continued: “Yes, but then together with Varozza”.

Given the pictorial practice of each, this choice may seem surprising. On second thought, the “review,” this choice is quite consistent to the point of titling the exhibition « Birds of a feather flock together». This exhibition proposes to demonstrate the development of the artistic field, from Hyperfiguration to Préfiguration, in a dialogue that reveals the essence of the two artists.

The Hyperfiguration (and not hyperrealism) of François Bard (1959) who states: “I try to find the myth in the most immediate, almost banal daily life. An icon is a form accessible to all and eminently contemporary of our humanity. A propaganda of the real. ”

With his precise figures, thick in the material, in an affirmed but also offbeat gesture, where the fate of the figure is at the end of the painter’s brush, the head cut, the body offset, when not the opposite. Figure elevated to the rank of an icon, affirmed while being simultaneously commented as “remote icon”. And while you instantly perceive what is represented, afterwards you understand that actually, the real subject is the way Bard achieves it.

The Préfigure is an emergence, a form not yet final, yet extremely demanding in the artist’s “making”: knowing where to start and, especially, where to stop.

With Varozza (1955), the subject does not reveal itself immediately, a time of familiarisation is necessary to impregnate you with its pictoriality, to immerse yourself and to make your own image: “The viewer makes the painting”, as to quote François Bard. Painting dixit filled with musicality (let’s not forget that Varozza is also active in the musical field with “Moduo”), with the full and the empty, its whites and its vibrating touches, with little materiality and its light emphasising the facility of préfigures, as Varozza calls them, or figures manifesting themselves. Which is his “societal” response to a world saturated in images. 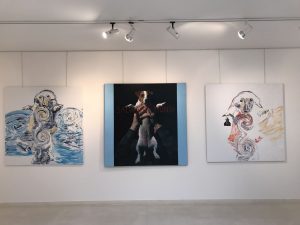