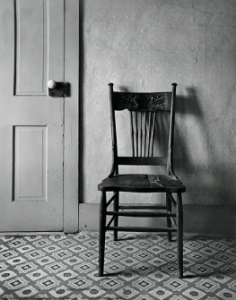 A respected writer in the United States, the American Wright Morris (1910-1998) adopted an experimental approach to photography, seeking very early to“capture the essence of what is visible”. For the first time in France, the Fondation Henri Cartier-Bresson is offering a chance to share his vision both photographic and literary of America. This exhibition includes prints, books and documents from the Collection of the Estate of Wright Morris in San Francisco.

Wright Morris spent his childhood shunted between Nebraska, Chicago, his uncles’ farms and accompanying his father on long trips across America. At 23, he travelled through Europe and on his return decided to dedicate himself entirely to writing. He quickly realised that photography could seize what he had until then been attempting to “capture in words”. This formal research led to his first “photo-text”, The Inhabitants (1946), in which fictional texts are paired with photographs mainly taken in Nebraska, where he grew up.

Unlike his fiction which often focuses on flamboyant characters, his photographs are practically devoid of figures. And yet lots of life quietly leaks out between the chairs (omnipresent), mirrors, cars or even wooden architecture (fundamental). It is as if his photographs are rooted in the land, imbued with a disarming simplicity while retaining the enigmatic character of places and objects laid bare, with no human presence to bring them alive. Bard of the intimate, Wright Morris makes the invisible visible and this paradox is probably the most noble intention in photography.