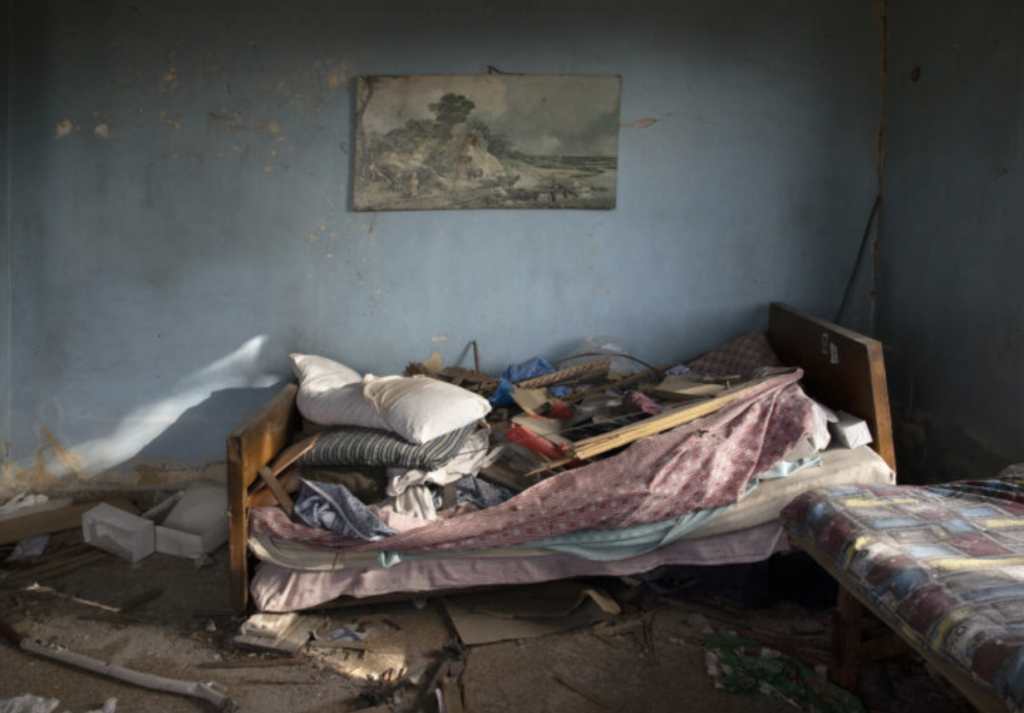 Mathieu Pernot, winner of the 2019 HCB Award, is presenting La ruine de sa demeure at the Fondation HCB, a photographic journey through Lebanon, Syria and Iraq. The point of departure is a travel album by the artist’s grandfather, made in 1926, which delineates an itinerary from Beirut to Mosul, between the ruins of thousand‑year‑old civilizations in the Middle East and those of tragedies from recent history. With a near‑documentary approach, Pernot offers a dialectical work interested in juxtaposing great historical narratives with those of his family’s history.

Pernot began the project in September 2019 in Beirut, where his grandparents and father had lived starting in 1925 and until the latter left for France in 1958. Through his research, on his first trip he discovered his family apartment. Returning to the capital after the portside explosion on August 4, 2020, the building had become inaccessible and risked collapse. The artist thus found himself confronted with, and intimately linked to the fragile history of Lebanon.

From Lebanon to Iraq, the artist is continual witness to scenes of desolation, a far cry from family or travel photos taken by his grandfather almost a century before him. One finds the splendor of archeological sites like Lebanon’s Baalbek, “irrevocable trace of civilization” (Hala Kodmani), and the Nineveh Plains in Iraq, beside cities devastated by disasters and recent wars: in Homs, Aleppo or Mosul.

Out of this permanent double contrast between the innocence of photos from family albums and the violence of present-day landscapes, between ruins of a 3,000-year history and those of recent armed conflicts, comes a nonlinear reflection on the region—this cradle of civilization that now seems to represent its tragic end. Pernot’s journey forms a part of a set of crossed histories with different temporalities, and “plunges us into the mixed-up stories of photography” (Etienne Hatt).

Despite many obstacles related to the pandemic and difficult access to certain conflict zones, Pernot succeeded in extending the bounds of his grandfather’s travels by forging his own path to Aleppo and Mosul, in what the artist called “a journey into the ruins of history”.

The exhibition La ruine de sa demeure presents around fifty prints by Mathieu Pernot, his grandfather’s photo album, photographs from his family archives, as well as photos found in the destroyed houses of Mosul.

Biography
Mathieu Pernot, born in 1970 in Fréjus, France, lives and works in Paris. During his time at the École Nationale Supérieure de la Photographie, Pernot met with Tsigane families in Arles, among whom the Gorgans, a family he’s worked with continuously thereafter. In the 2000s, he began various series on the topics of confinement, urbanism and migration. His work with Philippe Artières on the archives of the psychiatric hospital Bon Saveur in Picauville (Manche) won him the Prix Nadar in 2013. In 2014, he received the Prix Niépce, and that same year the Jeu de Paume devoted an exhibition to him entitled La Traversée, showing 20 years of his photography. In 2020, Pernot published Ce qu’il se passe: Lesbos 2020, Éditions GwinZegal.

Presented by the Fondation Henri Cartier-Bresson, the HCB Award is a 35,000 euros grant that supports the creation of a long-term photography project. It is intended for a photographer who has already created a significant body of work with a documentary-style approach. Presented once every two years, the HCB Award results in an exhibition at the Fondation HCB and the publication of a book.

More information on the HCB Award

The Fondation d’entreprise Hermès is the patron of the HCB Award.