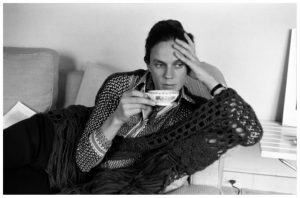 The new building, at the 79 rue des Archives, allow a street-level exhibition space doubled, and soon to be tripled. The facilities for receiving the public, school visits and persons with reduced mobility are now improved. The archives are gathered and a research library is open. The space designed by the Novo architectural agency establishes the Fondation Henri Cartier-Bresson in the cultural heart of le Marais, an outstanding area in Europe, enabling the Foundation to expand the scope of its endeavours for a growing audience. A new venue for photography, after fifteen years at the forefront since it opened in Montparnasse in 2003.

The first exhibition in the Marais is a retrospective dedicated to Martine Franck. At the initiative of Fondation HCB, Martine Franck’s photographic work is finally being given a comprehensive view at. Put forward by Agnès Sire, co-founder and artistic director of the Foundation, the exhibition based on photographic prints, books and documents from the Foundation’s fund is co-produced by the Musée de l’Elysée in Lausanne. It will be presented in Switzerland on Spring 2019 before being welcomed at the FOMU in Antwerp for Summer. For this occasion, a monograph consisting of many texts and interviews as well as three hundred photographs and documents will be published at the Éditions Xavier Barral.

Martine Franck professed a wonder and celebration of life, a profound joy faced with humanity while at the same time ghting against exclusion with all the empathy she was able to show. A socially engaged photographer, Martine Franck became an activist for many of these causes she actively photographed.

Born in Antwerp in 1938, Martine Franck grew up in the UK and the United States as part of a family of collectors. A polyglot, history of art student and passionate about sculpture, it was during a long trip to the Orient in 1963 that she discovered photography. Back in Paris, she became an independant photographer, after being assistant to Gjon Mili and Eliot Elisofon, and collaborated with the major American magazines, Life, Fortune, Sports Illustrated, The New York Times and Vogue with reportages and portraits of artists. She helped set up the Vu agency, then Viva.  Martine Franck was also involved in the adventure of the Théâtre du Soleil troupe from the start, with her friend Ariane Mnouchkine who had shared her oriental trip. In 1970, she married Henri Cartier-Bresson, an accomplished artist, who encouraged her to follow her own way. She later joined the Magnum cooperative, which still handles her work today.

The work on the exhibition and accompanying book was begun a long time in advance, in 2011, with Martine Franck. The photographer wanted to entrust the creation of the book and the curating of the exhibition to Agnès Sire with whom she’d been managing this Fondation for many years.  The selectioFoundationographs, the more chronological sequence, punctuated with texts, and the interview with her friend, the writer Dominique Eddé, were the main features of this vast project. In it, you can follow the thread of her engagement through series of portraits, quasi-abstract landscapes, which are bound to surprise, and a sort of remote chronical of political life.