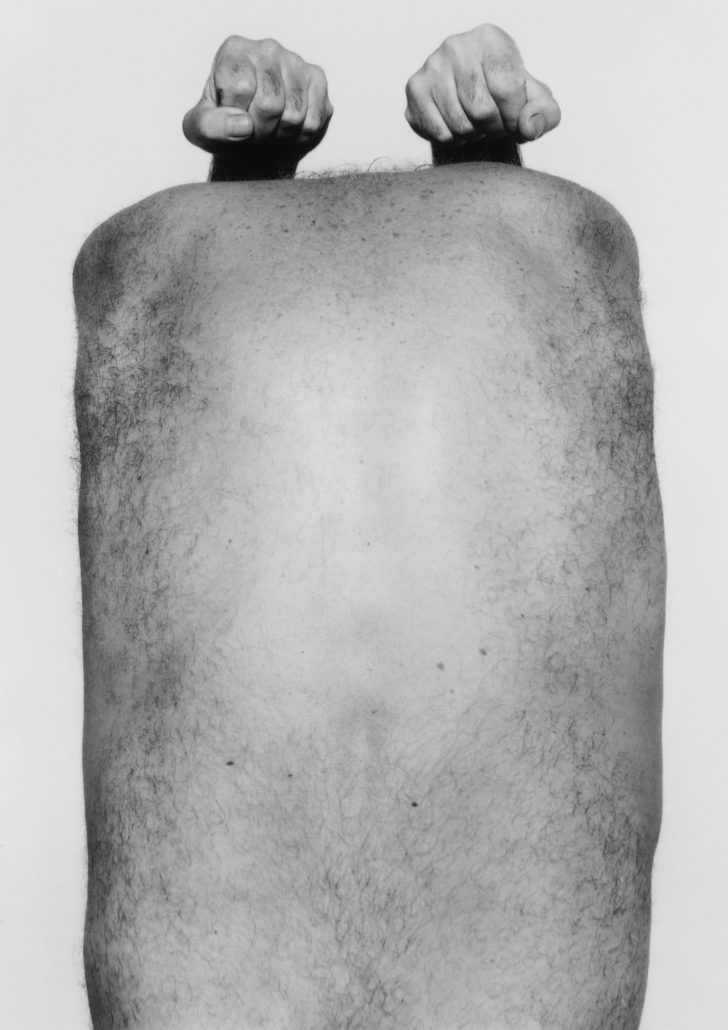 Fondation HCB presents a remarkable exhibition on the œuvre of John Coplans (1920‑2003), in collaboration with Le Point du Jour, Centre d’Art Éditeur in Cherbourg-en-Cotentin. Works on show here, on loan from French collections, testify to the audacity of this British artist, known for uncompromising representations of his body.

Coplans, who emigrated to the United States at the start of the 1960s, was at first painter, art critic, museum director and curator before devoting himself fully to photography in the early 1980s. At sixty years old, after twenty years of promoting the work of other artists, he retired to take up a life in art. He then developed a photography practice in which he represented himself nude, in black and white and often fragmented, his head always out of frame. To all these images, produced between 1984 and 2002, he attributed the generic title Self Portrait; descriptive titles and subtitles specify the body part depicted or the posture.

As a primary, unique and impersonal object, the body is a medium for jubilant, ever-renewed explorations of the life of form. Coplans’ work, often reductively seen as a representation of the aging body, has lighter, more universal ambitions and inscribes in a long history of art forms through its metaphorical connections to nature or sculpture. His œuvre redefines the meaning of age, no longer a progression towards the end of life, instead, an opportunity for a long-term record of humankind and an initiative for recollecting primitive forms.

The absence of the face, and the choice of the fragment as plastic element released a flood of inventions and formal analogies that seemed inexhaustible, only stopping with the artist’s passing. Coplans’ images are by turns subdued and explosive, funny, provocative and always carefully considered. They answer to a demand for clarity that transfigures expressionist pathos.

The exhibition La Vie des Formes is structured in three sets presented chronologically. First, small prints made at the start of Coplans’ career in photography (Torso, Back, Hands, Feet…); followed by, in 1988, large formats and montage combining several body fragments to create a single but disjointed image; and finally, as a great connoisseur of art history, Coplans integrated research on artists he studied, exhibited and knew into his own work, and a selection of works by these artists (Brancusi, Carleton Watkins, Walker Evans, Lee Friedlander, Jan Groover, Weegee…) is presented.

John Coplans was born in London in 1920. The son of a doctor in medicine and art amateur, he spent most of his childhood between London and South Africa. In 1937, aware of the global danger posed by Nazi Germany, he joined the British army. He fought until 1945 in East Africa, then in India and Burma.

In 1946, John Coplans started an art degree but quickly gave up. He moved to London. For ten years or so, he has painted and contributed to the rise of abstract art, in the wake of lyrical abstraction, then Hard Edge. In 1960, Coplans emigrated to the United States and moved in San Francisco. In 1962, he participated in the creation of Artforum. The magazine quickly established itself as a monthly reference for art and creative news. The first of its kind on the West Coast, it supported and united artists, helping to bring out the “Los Angeles scene” and “West Coast art”. Coplans was its editor from 1971 to 1977 (in New York, where the magazine moved in 1967).

John Coplans was also a curator, director of the Art Gallery of the University of California at Irvine (1965‑1967) and Senior Curator of the Pasadena Art Museum in (1967-1970). From 1978 to 1980, he directed the Akron Art Museum, Ohio. At this time, he began his first photographic experiments.

In 1980, he decided to cease these activities to become an artist again and to devote himself to photography. He moved to New York. From 1985 onwards, he exhibited regularly in France and Europe. In 1988, the San Francisco Museum of Modern Art (SFMOMA) set up the first major exhibition of the photographer, which was then presented at the MoMA in New York the same year. John Coplans died in New York on August 21, 2003.

Coproduction
The exhibition is coproduced with Le Point du Jour in Cherbourg-en-Cotentin. It will be shown from January 29 to May 15, 2022.

Warning: some of the exhibition’s images may offend the sensibilities of young visitors.

Image: Back with Arms Above, 1984 © The John Coplans Trust