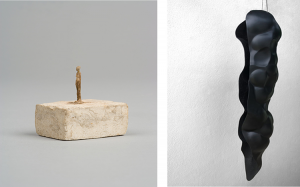 Gray, empty, cries, excerpts from a verse by Alberto Giacometti, bring together in this exhibition two artists who are separated by the space, time and form of their sculptures. We would therefore be entitled to question the meaning and nature of this association since in fact the two artists did not cross. Rui Chafes was born in 1966, the year of Alberto Giacometti’s death, and there is no biographical or historical element in favor of dialogue.

From its genesis, this exhibition was thus a meeting. The idea has arisen with the force of evidence, without any formal analogy, the slightest mimicry or the spirit of filiation. Thanks to the awareness of this difference and even more to the resonance capacity of the works of the two artists, this project has been deployed with the vitality of a research and a territory of images and meaning to explore. How to reach, from matter, the point where confluence immateriality and transcendence? How to represent the invisible? Alberto Giacometti and Rui Chafes take autonomous paths of research to achieve this: Giacometti in an exasperated dematerialization work, Rui Chafes defying the iron to the limits of imponderability. The tension provoked by the works of the two sculptors is woven on the wire of a blade, between rise and fall. Without deviating from the nature of his research, Rui Chafes allows a unique approach to the work of Giacometti, a sensitive experience where silence and solitude prevail.

This exhibition is also a proposal for resistance. In contrast to the contemporary lexicon of acceleration and homogeneity, Rui Chafes accompanies Alberto Giacometti in the creation of “matte, obscure, harsh, opaque points”. In his words, “carry the flame”. See: the exhibition can be conjugated in the declination of this verb. See the invisible. This exhibition presents fifteen works by Alberto Giacometti (eleven sculptures and four drawings) and seven sculptures by Rui Chafes specially designed for this project, with the exception of Tear V (2015). Gray, Empty, Cree, the three words that have united the two sculptors in a space outside history and the limits of time, make them venture the paths of the night and the unknown.