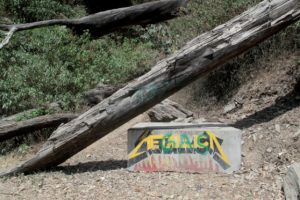 Since the mid-1990s, the work of Alexandre Estrela (born in Lisbon in 1971) has been distinguished by its original and idiosyncratic way of agglutinating and superimposing a wide range of fields, themes and references: studies on the perception of science fiction, from popular culture to cinema and the visual arts. In the latter case, it is worth highlighting its obvious interest in the legacy of experimental and conceptual practices that have contributed decisively to the formation of an indefinable and unclassifiable heterodox field between the visual arts and the experimental film, reflecting a vast investigation and incisive on the nature and the range of the image.

Metal Hurlant was designed for the exhibition space of the Calouste Gulbenkian Foundation in Paris. In total, it brings together nine of Alexandre Estrela’s recent works, including four unpublished works. In these works, the artist continues his exploration of questions and themes related to the qualities of the image (technique) in close articulation with the intrinsic potentialities of the devices for shooting, editing and broadcasting images, especially in the field of video. For the artist, the eminently factitious and paradoxical character of the image induces a whole field of possibilities of reformulation – destabilization, illusion, expansion – of the arc of relations and transmutations between image, medium and perception. Thus, in this exhibition – and the title is a first clue – the presence of a specific type of material is put forward: the metal. A material that becomes an object of thematization but also a characteristic of some of the projection screens. In this sense, they are works strongly attached to their physical and spatial conditions, which highlight the more properly sculptural and architectural aspects of the work of Alexandre Estrela.

By turning away from figurative expectations to explore the plastic potentialities and semantic derivations of images, Alexandre Estrela seeks a new perceptual and artistic horizon, an alternative field of visual experiences where images, beyond their specific value, fulfill a function heuristic, the search for fruitful links between the still image and the moving image, between figuration and abstraction, between two-dimensionality and three-dimensionality, between sound, image and materiality, punctuations of a singular speculative and creative universe that scrutinizes the way in which technological devices provide processes for the passage, transformation and reconfiguration of the visible.

Alexandre Estrela (1971) lives and works in Lisbon. He studied at the School of Visual Arts in New York. In that same city, he completed a residency at the International Studio & Curatorial Program. He also graduated in painting from the Faculty of Fine Arts in Lisbon, where he currently teaches. He has made personal exhibitions at the Serralves Museum (Meio Concreto, Oporto in 2013), at the Reina Sofía National Art Museum (Pockets of Silence, Madrid in 2015-2016), or at the M HKA (Roda Lume, Antwerp, in 2016). He is responsible for the Oporto space in Lisbon, where he organizes experimental film screenings.