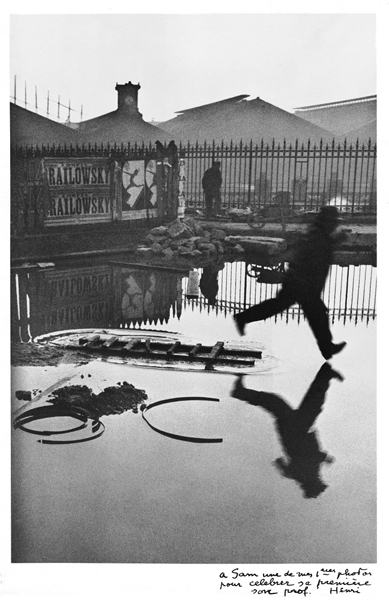 Organized with the collaboration of the Fondation Henri Cartier-Bresson, the exhibition highlights major works of the one of the greatest photographers of the 20th century . The images were chosen from among the many travel shots and portraits of artists from the Szafran Collection of the Pierre Gianadda Foundation: wanderings of the 1930s, views of France, trips to India and Mexico, face-to-face with Pierre Bonnard, Henri Matisse, Alberto Giacometti, and so many others.
The exhibition also recalls the close ties forged between Henri Cartier-Bresson and Léonard Gianadda.

The photographs of Henri Cartier-Bresson donated by Sam, Lilette and Sébastien to the Pierre Gianadda Foundation constitute an exceptional collection in more ways than one. They are representative of the work of one of the greatest photographers of the 20th century, on the one hand, and , on the other hand, tell in their own way the deep friendship which united Henri Cartier-Bresson and Sam Szafran during over thirty years.
The famous photographer met the young painter in 1972, during an exhibition dedicated to contemporary art in Paris. Gradually abandoning his Leica in favor of pencils, Henri asks Sam to be his drawing teacher. There followed frequent exchanges and meetings between them and with their families. Regularly, Henri Cartier-Bresson offers his “intense friend” Sam Szafran carefully chosen prints.
Most of the 226 photographs thus donated are autographed and bear witness to mutual affection and admiration. After the photographer’s death in 2004, the Szafran family decided to offer the set to Léonard and the Pierre Gianadda Foundation, as a testimony to the friendship that brought them together.

The Cartier-Bresson exhibition continues in the Galerie du Foyer of the Foundation, with more intimate photographs. In the form of portraits, they recount the friendships shared by Henri Cartier-Bresson and Sam Szafran. Another facet of this unique collection.