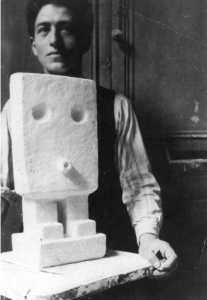 “In Search of Lost Works” is an investigation into the traces of unpublished works by Alberto Giacometti.
Missing? Not completely, because Alberto Giacometti left clues behind him, precious documented testimonies that allow us today to present, at the Giacometti Institute, little-known and unpublished works. Alberto Giacometti went through many phases of doubt during his career, which led him to tirelessly question his work. Lost, sold or damaged, the works all have their own history. With the help of sketches, notebooks and archival photographs, decisive works are now reconstructed in the exhibition rooms in front of authentic pieces from the same period.

“Throughout many interviews given mainly from the 1950s onwards, Alberto Giacometti created for himself the mythical character of a man perpetually dissatisfied and prey to daily existential drama. When it proved impossible to come out of the creative impasse, the gesture of destroying the work, and by that gesture, making a clean sweep, became part of the whole character. Legend has it that Giacometti, haunted by dissatisfaction, destroyed his works as he was making them. Only a limited selection might have been taken from his hands at times.
If the testimonies from those closest confirm that the artist was continually questioning his practise, a careful examination of the archives shows however that he didn’t systematically destroy his works. In the accounts he gave his close relations and journalists, he especially referred to his post-war career, while the disappearance of his works was a more common phenomenon in the 1920s and at the beginning of the 1930s. Analysing those years also shows that the voluntary destruction was, in reality, rarely the only explanation for their loss. We are dealing with a varied and complex typology of ‘disappeared’ works and the hand of Giacometti was not always responsible, far from it in fact.”

Michèle Kieffer, Extract from the catalog of the exhibition