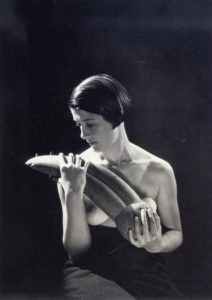 In 1933, Alberto Giacometti wrote to André Breton: ‘Read Sade yesterday, I’m very interested in his writings’.In the 1930s, he created objects of a symbolic function with a violent eroticism, similar to that found in D.A.F. de Sade’s writings. The epoch was propitious to the rehabilitation of the divine Marquis, a model of freedom and modernity for artists and writers. The libertine philosopher fascinated Giacometti and his friends, among them Georges Bataille, André Masson, Luis Buñuel, and Salvador Dali. This exhibition shows for the first time the influence of Sade’s writings on his works and his texts. It gathers a large part of the surrealist works that Giacometti made between 1929 and 1934, photographs of some works that have disappeared, and many notebooks of previously unseen drawings.

A long time before discovering Sade, the young Giacometti made copies of religious subjects representing scenes of violence. From 1929, his sculptures and texts came closer to Sade’s universe. Giacometti joined the members of the surrealist circle who contributed to the rediscovery of Sade, first the dissidents gathered around Bataille, then the formal group lead by Breton. Those artists placed imagination, fantasy and dream at the heart of their art practice. The name of Sade appeared several times in his notebooks of the time, in which the artist drew sculptures with strong erotic content, schematizing the sexual organs or representing scenes of voyeurism and prostitution.

The depiction of the sexual relationship appears in countless works between 1929 and 1933. The body is represented in an allusive way, through an organic detail or in a shape both animal and vegetable. The artist represented the tension of a sexuality seen as a struggle between the two sexes. Giacometti abandoned naturalist sculpture for a symbolic representation suggesting penetration, rape and at times murder, the culmination of Sadian pleasure in which sexual impulses are freed so that pleasure and death can coincide.

In 1931, Giacometti gathered under the nameMute and Mobile Objectsa series of equivocal works that are close to the double meaning and black humour images made by the surrealists. With their unstable and threatening character, those works bring out physical and psychological violence. These sculptures take the form of objects on the verge of abstraction, while suggesting a connection to the body. Those objects that can be handled bring to mind instruments of sadistic pleasure, which generate a ‘violent emotion impossible to define, undoubtedly connected to subconscious sexual urges’. (Maurice Nadeau)