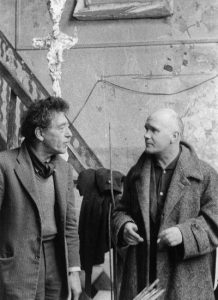 Sixty years after its release in the crossbow editions, this book remains one of the most valuable evidence on the work of the artist and a unique description of his creative world. Built around this text, the exhibition illustrates the three main themes addressed by Genet: the workshop, the representation of women, death.

With the continuous reconstitution of the artist’s Studio, the visitor will discover that Genet, considered “the most important and complete” works by Giacometti, “his other self, gasoline and the ultimate residue of his artistic contribution.” It is in this space mythical, surrounded with dust and immersed in the silence, Genet, sitting on a Chair in uncomfortable straw, asking repeatedly, between 1954 and 1957. Between the two men is established an intense dialogue, which reveals the essence of art and personality of Giacometti.

Describing the works surrounding him, Genet stops on the figures of women standing. Among these, those that the artist associates with his visits to brothels, spaces of staging of the body than the gaze of the artist transformed into goddesses. These are the same women slim, immobile, that Giacometti is on the cover of the famous play by Genet the balcony. Like Genet, Giacometti is fascinated by death, a subject that haunts his work throughout his career. His sculptures and paintings show a world to the edge of life, inhabited by the ‘ innumerable people dead “described by the poet.

Next to iconic works such as the Group of the women of Venice in plaster of 1956, presented for the first time in France, is a set of works seen by Genet at the workshop, as well as the famous portrait of the writer preserved at the Centre Pompidou.
The original manuscript of the workshop of Alberto Giacometti, a selection of drawings and sketches, including some unpublished books, photographs and video archives from the rich Fund of the Foundation, complete this set helps illuminate the unique relationship between these two rebel geniuses of the 20th century.

Curator of the exhibition: Serena Bucalo-Mussely