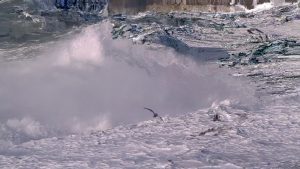 Immersed in an artistic world nestled in a land of water in the foothills of the Vosges mountains, the experience abounds in connections between water and digital media as well as showcasing our common causes through a harmonious relationship with the outside world. The works on show take on the form of a fountain or basin, and then moments later transform into other objects constructed from water, redolent of the age we are living in.

Beyond its symbolism, water here is occasionally used to tell a story, and at other times is harnessed for its shape-shifting properties, sometimes even constituting an entire work in itself. In confrontation with water, digital technology explores its instability and evaporation, its flows and stagnations, studies the formation of waves and droplets, and holds up a double-sided mirror to the infinite array of possibilities at our fingertips.

The work which sparked this exhibition, Turbulences by Étienne Rey, was created for the François Schneider Foundation as part of a long-term project, supported by the Région Grand Est and taken on by L’Ososphère of which the artist is a member. This work exploits “turbulence and flow as an ‘engine’ of a dynamic system, generating movement within the installation which relies on the principles of fluid mechanics and plays with their unpredictable nature”.

in co-production with Quatre 4.0 / l’ososphère