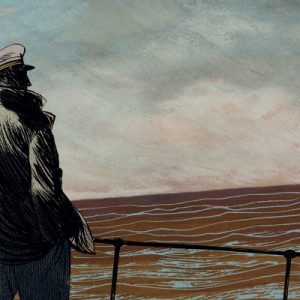 The joyous, playful scenography features more than two hundred documents and objects, including original pieces, manuscripts, illustrations and animated films. The collection aims to capture the imagination of those nostalgic for the sixties, as well as aficionados of more contemporary graphic novels.

Paper twirls all through the Foundation to elicit the substance of water, its link to the landscape and the environment, to travel stories and imaginary worlds, or its relations with humanity and with the body – in particular, with the tradition of taking baths.
The exhibition is constructed from the heritage collections of the International City of Comics and Images (Cité Internationale de la Bande Dessinée et de l’Image) in Angoulême, as well as loans from authors, publishers and collectors. It retraces the history of drawings and illustrations on the theme of water over the past century, which have inspired a multitude of stories.

The different approaches of the authors and artists down the years are all on show: from the early authors of the late-nineteenth century who set the tone for comic art (Georges Mory, Marcel Turlin) to the «clear line» school (Bruno Le Floc’h, Christian Cailleaux) to the iconic Moebius or Schuiten, and into the contemporary period and the rejuvenation of the genre via the «realist» comics of Nicolas de Crécy, Marine Blandin, Koren Muo, and others. Work by graduates of the HEAR art school (Haute Ecole des arts du Rhin, Mulhouse et Strasbourg) – an institution famous for its illustration department – are also on display.

The exhibition is produced in partnership with the International City of Comics and Images. It is curated by scientific advisor Jean-Philippe, with scenography by the Lucie Lom agency. In this context, and in partnership with HEAR and the illustration department, artists’ residencies are open to 2019 graduates. An «off limits» week for fourth- and fifth-year students will likewise be held in November 2019 at the François Schneider Foundation. Parts of the exhibition are also being shown at L’espace 110 – Cultural center in Illzach as part of the 35th Bédéciné Festival.

The program also features numerous illustration and writing workshops, round tables and book signings, a series of comic concerts and a youth zone. A large reading area will also be available, where visitors are invited to immerse themselves.

This exhibition will feature in 2020’s Year of the Comic Strip, announced by the Minister of Culture and coordinated by the International City of Comics and Images and the National Book Center.