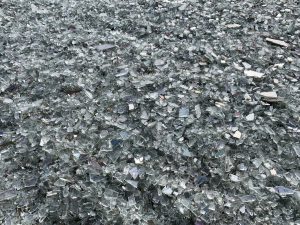 A major figure of the French and international art scene, Céleste Boursier-Mougenot was given free rein by the François Schneider Foundation.

In response, the representative for France at the 56th Venice Biennale in 2015 took a poetic knife to the entire Art Centre, recreating in situ a set of visual and sound installations whose aim is to disorient the visitor. The usual downwards trajectory is inverted to create a route that goes from the building’s deepest point up to its peak.

The materials flow, escape, spread out. Glass, water and minerals spread from the edges of the foundation to its viscera. At once both minimal and sophisticated, Céleste Boursier-Mougenot’s work is a clever fusion of science and fiction.

A visionary for improbable encounters between the living things and manufactured objects that populate our world, to which the artist grants a soul, Céleste Boursier-Mougenot shapes his hybrid works with the control of a craftsman and the “irrationality” of an engineer. His subtle staging and use of space draws on his experiences in the theatre. In the belief that too much visual noise erodes the listening experience, he recreates a sensory, sprightly procession at the heart of the Art Centre, whereby the visitor plays the roles of tightrope walker, swimmer, cosmonaut…

The Foundation enables secondary school pupils to access higher education by offering them grants and assists contemporary artists by supporting the diffusion of their work. The Foundation, directed by Marie Terrieux, encourages creative activity through various initiatives devoted to the theme of water, including an international competition, the acquisition of works for its collection and the organisation of themed exhibitions in its contemporary art centre and sculpture garden. This work is complemented by publications, loans, travelling exhibitions and a residency programme for young artists from art schools along the Rhine.

Located beside the Rhine, which runs from Switzerland to the Netherlands by way of France and Germany, the François Schneider Foundation places interculturality at the heart of its programming, aiming to bring about fruitful contacts between artists and the local populations of these different areas.