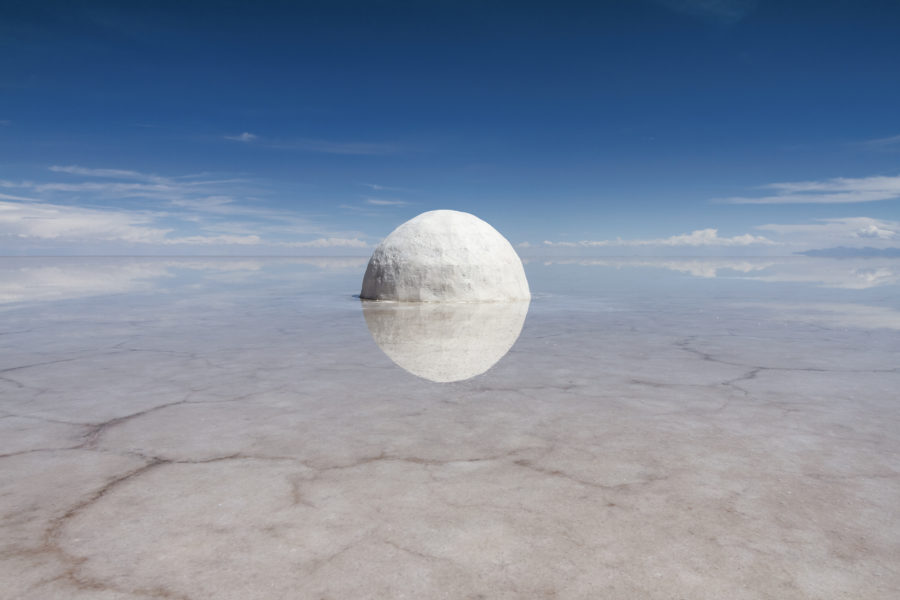 For the 8th edition of the Contemporary Talents Competition, a new display presents the works of the 7 selected winners, cultivating notions of fragments and the ephemeral.

On the program, a rainbow composed of thousands of micro glass beads by the duo of artists Hao Jingfang & Wang Lingjie, (Over the Rainbow ), a puddle drawn on the ground as a living installation that in essence is in eternal mutation at Capucine Vandebrouck (Puddle series ), photographer Wiktoria Wojciechowska’s cyclists caught in a Chinese thunderstorm and covered with tiny evanescent droplets on their large rain capes (Short Flashes, 2013). The discovery continues with Elina, an ephemeral planet made of salt bricks on the Uyuni Salt Flat in Bolivian soil by Guillaume Barth, narrating the fragility of the world and the power of nature. As for Eva Nielsen, she proposes a painting where optical games, illusion and mirage are at the rendezvous for her gaps on the ocean. It is also a question of ocean and cracks in Olivier Crouzel’s work, who has patiently filmed the Signal building in Soulac sur mer, an abandoned building with a dilapidated new life… 18 video curtains make up a gigantic installation-projection. Finally Rachael-Louise Bailey exhibits Global, a large floating sphere, composed of 3.5 km of inner tubes, collected among the polluting materials found at sea. From these scattered and fragmented objects, she groups them together to give them a new function. Coming from China, Great Britain, Poland, Denmark or France, each and every one of the artists explore the fleetingness of the elements and the world.