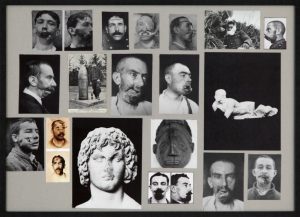 The corporate foundation Francès is pleased to welcome French artist Kader Attia, winner of the Marcel Duchamp Prize (2016) represented by Galleria Continua partner of this exhibition entitled “Memory of Forgetfulness”. The spaces of the Foundation are entrusted to you in the form of a carte blanche to the artist to make a new reflection in this place of placing of the creation, since each year a new artist came into the scene. Kader Attia included for the first time the collection Francès 10 years ago with the acquisition in 2009 of the implementation of Alpha Beta and then the relationship intensified in the course of successive acquisitions. His works have a special place, intimate. Historical and political, they are part of a contemporary cultural dialogue and take part in the debate. They also have a strong resonance in the history of the collection Francès on one of the topics that nourishes and is passionate about : the excesses of humanity. The entire work of Kader Attia stirs the emotions and calls for the deepening of reflection.

For “Memory of Forgetfulness”, the artist addresses the themes of memory, the repair and clearing. It draws on the archives of history, the flaws of humanity and his personal stories. It extracts and shows the trauma and then to reuse and repair. A definition reflected the repair in a society that is obsessed with the erasure of a scar, a wrinkle, a trauma or a conflict, and that is tantamount to denying the existence of these traces, making the singularity of our humanity. Around this speech, Kader Attia holds a major weapon to heal the wounds : the “knowledge” of history and the world, for an otherness substantial. In sum, a work deeply social. Summoning his experience and his eastern culture, it deals with the uprooting and loss of identity denial and trauma are among the direct consequences of these events. The notions of culture and knowledge then appear as responses to, acts of resistance. The memory comes into play, it is at the heart of the artist’s work. Scrutinized and analyzed by the latter, it fascinates by its many abilities, including the one to forget some of the traumas, and then to make them reappear. Injuries physical or mental, are never completely erased, and to deny them would be dramatic, all the more that they reveal themselves in the implementation of a process of transmission.

The exhibition presents works from the collection of Frances, Alpha Beta (2009), an Arabic alphabet created sharp steel, a work where knowledge meets violence, weapons against ignorance. And Syrian Shells (2015), four casings of bombs from compressed in Syria. The violence of their deformation going hand in hand with their destructive function, they become the traces and the memory of a conflict, still in place now, and calling for the debate.
A new facility named “Memory of the forgotten” designed in-situ is proposed by the artist. Totally immersed in the dark, the Viewer is facing imprisonment, but attention should allow him to detect the possibilities of a loophole. Watch becomes a necessity, a survival. A unique experience to immerse themselves in the intricacies of memory.
Finally, airing the video presented to the price Marcel Duchamp, reflect the memory, where it is question of body memory and emptiness. How memory puts in place mechanisms to overcome the lack, that can also be destructive.
Kader Attia is a scar discourse on life and what it brings. As mirrors, his works reflect our fears and our wounds, but we do see the possibility of a greeting.