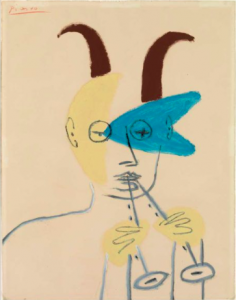 The year 2018 marked the fiftieth anniversary of the death of Jaume Sabartés (Barcelona, 10 June 1881 – Paris, 13 February 1968), a key figure in the life of Pablo Picasso and founder of the Picasso Museum in Barcelona. To mark the occasion, the Fernet-Branca Foundation is pleased to present, in partnership with the Picasso Museum in Barcelona, an exhibition in homage to Jaume Sabartés. This exhibition not only deepens his friendship with the Cubist master, but also his career as a biographer, writer, translator, teacher and intellectual.
Sabartés and Picasso were born the same year, in 1881, and met in Barcelona in 1899, when they were students in La Llotja. The connection between them was immediate and they quickly became regular members of the Four Gats meetings, making common friendships with Manuel Pallarès, Sebastià Junyer or Àngel Fernández de Soto, among other young artists. From then on and until Sabartés’ death in 1968, they were inseparable, even geographically separated by thousands of kilometres.

Pablo Picasso painted the first portrait of Jaume Sabartés in 1900. It was the first of a long series, since he continued to draw and caricature him for nearly sixty years.

Jaume Sabartés has written more than twenty texts about Picasso. His writings shed light on the artist’s life and work process and show that Jaume Sabartés had the firm conviction that Pablo Picasso was and would be, the greatest and most protean genius of the 20th century.
This exhibition highlights two protagonists whose lives and careers have been marked by both.

THE COLLECTION
Jaume Sabartés donated his collection of works by Pablo Picasso to the city of Barcelona in 1962. The collection originally consisted of three hundred and sixty-two works, including two hundred and thirty-eight original lithographs. Sabartés, in many writings, stressed the importance of the collection given to Barcelona, which he considered to be very complete.
The exhibition presents works by Picasso at different moments in his life, all dedicated to Sabartés.
There is a place for humour in the portraits that Picasso has dedicated to Sabartés throughout his life. Picasso presents Sabartés as a fauna, a satyr or a decadent poet. There are also compositions in the exhibition in which Picasso draws Sabartés flirting with pin-ups, taken directly from magazines such as Vogue or Ciné-Révélation. In the exhibition, the epistolary relations that Sabartés and Picasso maintained between 1905 and 1967 occupy a notable place. His letters show their complicity, affection and irony. The Picasso Museum in Barcelona opened its doors to the public on 9 March 1963.
Pablo Picasso continued to give Sabartés a sample of his graphic work and Sabartés continued to make annual donations to his Barcelona museum.
Jaume Sabartés died on February 13, 1968 in Paris. In homage to his friend, Pablo Picasso presented the city with his series on “Las Meninas”, in addition to the portrait of Jaume Sabartés painted in 1901. He also donated the letters he had sent to Sabartés (just under seven hundred) and succeeded his friend, informing the Picasso Museum in Barcelona that, from that moment on, he would give a copy of each of his engravings dedicated to Sabartés.