Fondation Fernet-Branca : Gregory Forstner “Get in, get out. No Fucking around.” 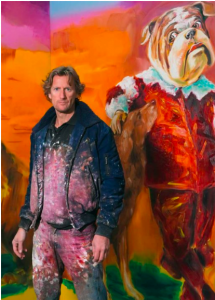 Ten years after its exhibition entitled “The Ship of Fools” at the Grenoble Museum in 2009, the Fernet-Branca Foundation invites the artist Gregory Forstner, who has just returned to France after living and working for ten years in Brooklyn, New York. From May 26 to September 29, 2019, the exhibition “Get in, get out. No Fucking around.” will provide an opportunity to present a selection of different series produced between Europe and the United States, as well as an overview of the artist’s more recent production. Among about fifty works, paintings, prints and drawings, the Fernet-Branca Foundation presents unpublished pieces from private and public collections, never before shown together and allowing to highlight the conceptual and aesthetic concerns of Gregory Forstner’s work.

Most often in large formats, Gregory Forstner’s paintings draw on art history, popular culture and his personal mythology. Borrowing his subjects from the most diverse iconographic sources, his compositions immediately strike by their visual impact. His universe, where laughter is never far from fear, where references to the great masters of the past meet and borrow from illustrations of all kinds, depicts a grotesque, worried and cruel humanity. To do this, the artist uses subterfuges of masks, disguises, transposition, and the most frightening scenes often take on the appearance of festivals, massacres, fairs or carnivals. Painted with large brush strokes, with a fiery spirit that sometimes borders on a kind of destructive rage, these images nevertheless remain “beautiful pieces of paint”. And it is ultimately the pictorial mastery that impresses us the most here, both by its dazzling chromaticity and by the implacable power of the touch. Power is, moreover, the word that comes to mind immediately to qualify these paintings whose expressive power remains in your memory for a long time.

“Get in, get out. No Fucking around.” The title of the exhibition refers to a dialogue between songwriter Tom Waits and his wife Kathleen Brennan while they were working on the album Bad as Me: “People don’t have much time,” she told him. Come in, come out. No bullshit. “This echoes Gregory Forstner, and not without humour, underlines the fact that painting is a matter of space but even more so, time.

Gregory Forstner’s work is first noticed by his buffoon figures inspired by 17th century Flemish engravings and the children’s tales that the artist brings to light in a new light. In his early paintings, he reconsidered the secondary characters of iconic paintings, emphasizing their singularities. The style is pictorial, retinal. The characters show ambivalence and ambiguity. The buffoon, who has become the figure of the artist, is the only one who dares to tell the kings the truth. Between 2000 and 2006, in parallel with the buffoons, Gregory Forstner borrowed emblematic figures from the painting that he reframed and to whom he gave new roles, such as Le Gentleman after Otto Dix, or Le Cosaque after Ilia Répine. Since 2006, Gregory Forstner has been composing productions around billiard or poker tables, featuring animal figures, comic characters of dogs and animals inspired by American illustrators Arthur Sarnoff and Cassius Marcellus Coolidge, illustrating a wide variety of postures and human situations and referring to journalistic caricatures. Some of his figures are dressed in uniforms of soldiers of the Wehrmacht and SS, a reference to his family history. About Gregory Forstner, Ludwig Seyfarth evokes works close to those of Art Spiegelman, Jörg Immendorff, Markus Lüpertz as well as the tradition of Flemish, popular, satirical and grotesque painting by Jérôme Bosch, Jan Steen and James Ensor. From 2008, Gregory Forstner began to draw inspiration from his environment in Bed-Stuy, Brooklyn, New York: his work is based on popular “pulp” images as well as 19th century illustrations on the American epic and the mythology that accompanies it. He is interested in Minstrels shows and therefore in the Black figure represented by Whites, and makes these new figures coexist with animal caricatures and the conceptual principle of the world in reverse. Some titles of paintings refer directly to George Orwell’s fable La Ferme des animaux. Today, all these characters compose a kind of personal encyclopedia, a catalogue of ambivalent figures that Gregory Forstner has at his disposal at all times as he rolls the dice like a poker player and shouts: “Quits or doubles! ».