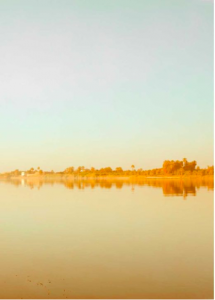 Elger Esser was born on May 11, 1967 in Stuttgart. Of German origin, he spent his childhood in Rome. Between 1986 and 1991, Elger Esser returned to Germany and began his career as an advertising photographer. He continued his studies at the Kunstakadémie in Düsseldorf, where he studied photography with the famous artist couple Bernd and Hilla Becher. Influenced by their work, it is by abandoning the principle of grid pattern (characteristic of the Becher couple’s work) and by appropriating landscape photography that Elger Esser stands out from their teaching. Elger Esser is particularly known for its large photographs of meditative landscapes. For these landscapes, the artist mainly uses the long pose technique, thus erasing the boundary between land, air and water. The horizon returns succinctly in Elger Esser’s photographs, intersecting the sky and the earth, they are then undifferentiated by the play of natural light. These landscapes, extended over the horizon, with the use of soft colours, reflect a feeling of deep calm due to the natural beauty that emanates from them. Elger Esser draws its inspiration from 19th century literature and in particular from the writings of Proust, Flaubert and Maupassant. A link between his photographic practice, history and memory is created. Today, the German photographic artist holds his place next to the greats. His work presents the most important collections such as at the Guggenheim in New York and at the Rijkmuseum in Amsterdam. He has had numerous solo exhibitions such as those at the Galleria d’Arte in Bologna, the Kunstverein in Hagen and the Herzong Foundation in Basel.