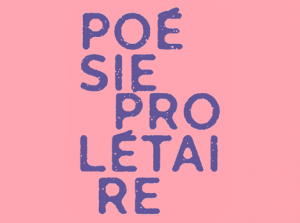 This exhibition borrows its title and some of its mood from the magazine Poézi Prolétèr, created in Paris by poets Katalin Molnar and Christophe Tarkos and artist Pascal Doury in the late 1990s. The magazine combined poetry and drawing, but without signing up to the categories of concrete or graphic poetry. It was more a place of unexpected encounters, following in the footsteps of other publications of the 1980s and 1990s – often homemade, precarious and marginal – in which the line was blurred between language, image, graph and sign.

Three thirtysomething artists – Carlotta Bailly-Borg, Anne Bourse and Mélanie Matranga – mix and tangle their works with those of three other artists who, for a wide variety of reasons, did not want to be fully part of the “art world”. Thérèse Bonnelalbay, who was close to a literary circle in the 1960s and 1970s, continued her profession as a nurse while drawing every day, and when she met Jean Dubuffet, this oriented the reception of her work towards Art Brut; Joëlle de la Casinière, a longtime nomad, developed light forms of writing and drawing adapted to her existence, and preferred the collective creativity of the Montfaucon Research Center to the idea of an individual “career”; and finally Lizzy Mercier Descloux – after founding the magazine Rock News with her partner Michel Esteban and opening the shop Harry Cover, selling records and second-hand clothing in Les Halles – continued her music career on New York’s No Wave scene, then in Africa in the 1980s: her poems and drawings are being shown in Paris for the first time.

This exhibition is a chance to weave several threads of ongoing research on invented genealogies between artists of various generations; a chance to establish comparisons and fortuitous conversations that go beyond the conventional boundaries of the artist’s position today, moving it towards the broader, wilder field of countercultures.