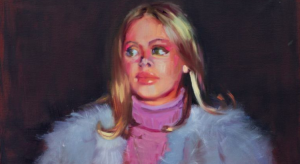 Swedish actress Britt Ekland—the sex symbol and James Bond girl who married Peter Sellers in 1964, and was later the girlfriend of Rod Stewart, to whom she was introduced by Joan Collins—was one of the most photographed celebrities of the 1960s. This author of the beauty and fitness handbook Sensual Beauty: And How to Achieve It (1984), whose face was remarkably altered by plastic surgery at age fifty, is a figure that Nina Childress painted repeatedly. It is she who appears on the leaflet for the artist’s exhibition at the Fondation d’Entreprise Ricard, entitled “Lobody Noves Me”. If one wants to “make the painting speak”, there is material for imagining all kinds of things with Britt Ekland and the pantheon of figures populating the work of Nina Childress: people who had established an image, often musicians—Cher, Karen Cheryl, Kate Bush, France Gall—supposing that this list has meaning. They are familiar faces that inspire all kinds of stories, reflections, considerations and narrative bombs that are not necessarily destined to explode. Childress, who obviously finds obviousness boring, is always quick to explain: “As far as I’m concerned, my purpose is not to create universal, sublime, essential, intelligent painting, so all I have left is the freedom to do what I want: that sometimes means painting any old thing in any old way”. And: “One can paint anything, and I even tend to think that it’s better to paint any old thing if you want the painting to be a bit exciting”. One understands that the subject must not overstep its “background” position, and one also no doubt understands that she is tired of seeing today’s painting (along with all other mediums) often reduced to its subject, to its immediate meanings, to its benevolent messages. One must not expect Nina to follow that path: “Politics, sociology, feminism and eroticism are subjects that don’t really interest me… and I’m nowhere near using LCD screens”. She defines herself as an “artiste peintre” (literally “painter artist”), deliberately employing an old-fashioned French term that first and foremost expresses a categorical refusal to yield to the sirens of the era—so, there will not be any LCD screens. If her painting must have a subject, it is painting itself—obviously.

Childress knows this “subject” quite well, at least she has had time to familiarise herself with its history, technique, tricks and changes since beginning to paint in the 1980s. “There was my paternal grandmother, on the American side, Doris Childress. An amateur painter who, when she arrived at our house, might run out and buy a canvas and paints so she could liven up a wall she found too white. On the other side, there was the third husband of my French grandmother, Georges Breuil, an uncompromising abstract painter who exhibited in 1961 in front of the Renault factories in Billancourt. I was always caught between those two conceptions of painting[2]”. Between decoration and avant-garde (that is to say in the exact position of today’s art): a tug-of-war that is manifested in her work in a literal way, since Nina takes the same image and creates two versions that she calls “Good” and “Bad”—the “Good” one is usually hyper-realistic and flattering, while the “Bad” one is more deliberately experimental and dark. One serves as a backfire to the other, both extinguishing the question of style, or rather catching it in its own trap. For her, it is not about having all styles, but rather summoning one or another in the interest of the painting she envisions. The “Bad” ones often offer more stylistic complexity—their backgrounds inspired by American abstract expressionism, and their figures more “pop” or more like “Bad” Painting (of course), and sometimes based on pictorial strategies borrowed from Bernard Buffet. It is difficult not to think of Buffet when looking at Nina Childress’s “remake” of a key realistic painting by Courbet, Enterrement, depicting a group of figures whose heads are covered by plastic bags—not an ecological message but an evocation of how the painter showed death. Unless they’re sniffing glue, because with Childress the subject of the painting is also subject to that sort of wide incongruity. This is an exercise she deliberately inflicts upon herself in her many self-portraits: Self-Portrait with Panties on My Head, or Self-Portrait with Simone de Beauvoir’s Hair, or Self-Portrait with Pince-Nez: she imposes few limits on her fantasy.

We do not quite know what will become of images in a time when we can, at home, make them from scratch, “correct” them, distance them from reality, reproduce them and circulate them. Much of contemporary painting questions the future of painting in the time of those images, using precisely the techniques and strategies that enable those images to appear. Nina Childress proceeds in the diametrically opposite way, trusting that painting will find a contemporary place for painting alongside those images.