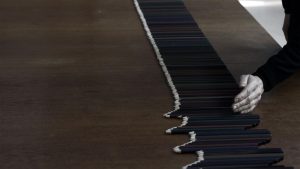 Since meeting in 1995, Marie Cool Fabio Balducci have created a joint œuvre characterised by slow, minimalist, often repetitive gestures: actions executed or documented within the exhibition space, using everyday objects (pens, thread, hand-cream) often associated with clerical work (sheets of A4 paper, office desks, Scotch tape, rulers). The calm, pre-determined, repetitive gestures enact a gradual shift into the realm of poetry, creating a space for freedom and silent resistance out of workplace procedures governed by the demands of productivity. Their work consists chiefly of gestures, or documented gestures. Their installations and works on paper, described as ‘actions’, are seen less frequently in public.

Extract from the text by curator Guillaume Désanges: “…As will be apparent, this ‘oblique angle’ is what prompted me to invite Marie Cool Fabio Balducci to take part in the current ‘Poésie balistique’ season at La Verrière. Because their work has a unique way of attaining poetry through the precision and rigour of its repetitive actions. Because the outcomes of their sensitive experiments are endlessly reframed in the critical discourse. Because they have forged a programme based on chance, a creative stance based on accident, a system that is never fixed. […] Through objects and videos, and a rarely seen body of work on paper, the exhibition presents an ensemble of ‘actions’ conceived as signifiers of a particular presence, but also as a way to break out and journey to the more unsettling boundaries of our perception.”