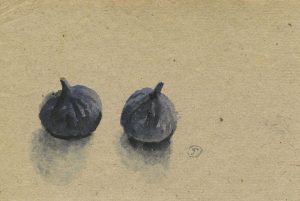 One hundred years after the birth of the Swiss artist Gérard de Palézieux, the Fondation Custodia is paying homage to him with this show focusing on his graphic work. The exhibition contains more than one hundred works on paper in the techniques favoured by Palézieux: prints, drawings, wash drawings and watercolours, and presents an opportunity to take stock of the coherence of his work as he dealt with his favourite subjects: landscape, portraits and still-lifes.

Born in 1919 in Vevey, Switzerland, Gérard de Palézieux had the chance to study in Florence between 1939 and 1943. His training took place at the fountainhead of the Italian Renaissance and he acquired a sound technical grounding. On his return to Switzerland he settled near Sierre in the Valais, in a small house amongst the vines where he was to live for the rest of his life. In 1947 he began taking a keen interest in etching, relentlessly exploring its possibilities – later, he was to build a collection of the best examples from the past.

Palézieux’s drawings, prints and watercolours are linked to the work of the artists of the past. He even used antique paper to lend his work a certain age. He understood how Rembrandt, Castiglione, Canaletto or Tiepolo used etching to achieve very specific effects. He also met and became friends with Giorgio Morandi, whom he admired for his way of life and for his art. In fact, he said that he had trouble freeing himself from Morandi’s graphic vocabulary. However, soft-ground etching, aquatint and monotype led him off in another direction.

At the beginning of the 1960s, following travels in Morocco and Provence, he took up watercolour painting and developed his skill during repeated visits to Venice. The spontaneity offered by the technique gave a new turn to his art. ‘Instinctive’, ‘intuitive’, as he described himself, Palézieux stayed true to his emotions when he approached landscape painting which, along with still-life, was to remain his main subject. As he observed the relentless degradation of the places he loved, and faced an unending succession of different aesthetic styles, the artist chose to describe, without nostalgia, the essential elements of his time as they related to the constituent elements of all time.

A few years before the death of the artist, close contact with him was made by Peter Schatborn, honorary director of the Rijksprentenkabinet in Amsterdam and Ger Luijten, director of the Fondation Custodia, with the intention of establishing a representative collection of his prints in Paris. The current exhibition endorses this promise of a gift, the donated group having now been supplemented by the purchase of a number of drawings and watercolours.