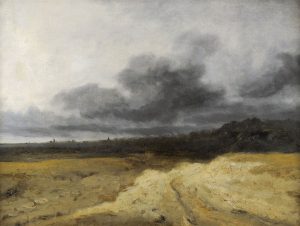 Admired by Vincent van Gogh, Georges Michel is considered the forerunner of painting outdoors. Influenced by the painters of the century of gold Dutch and nicknamed the “Montmartre Ruisdael’, there is still little known to the general public.

The Custodia Foundation, in collaboration with the royal monastery of Brou, proposes to lift the veil on this artist whose dealer Paul Durand-Ruel was one of the first to notice the merit in the 19th century. This first monographic exhibition dedicated to Georges Michel 50 years presents some eighty paintings and drawings – public and private collections mainly from French – including several acquisitions recent Foundation Custodia.

Georges Michel was born in 1763 in Paris where he died in 1843 after a singular career, reality or construction post-mortem of the myth of the misunderstood artist. Most of what we know of him comes from the biography written by Alfred Sensier in 1873, as it was told to him by the widow of the painter. Far from official circles, he participated in the Salon between 1791 – date the exhibition is open to outside the former Royal Academy artists – and 1814. Subsequently, there is no more talk of him, until the sale of his works and his Fund workshop in 1842, a year before his death.