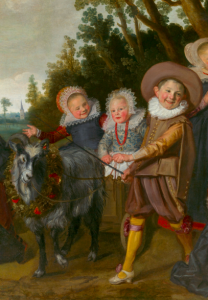 Frans Hals (1582/83-1666) is one of the greatest portrait painters of the Dutch Golden Age and, along with Rembrandt, responsible for revolutionising the genre. The artist is mostly famous for his individual portraits and his large compositions representing militia members, and his family portraits are not particularly well-known. Only four of them survive today, all included in the exhibition.

The exhibition was prompted by the acquisition by the Toledo Museum of Art in 2011 of Frans Hals’s Van Campen Family in a Landscape, as well as the recent conservation of Children of the Van Campen Family with a Goat Cart (now in the Royal Museums of Fine Arts of Belgium). These two works originally formed one composition, separated for unknown reasons likely in the early 19th century. The restoration work undertaken in Brussels also confirmed that a Head of a Young Boy, currently in a private collection in Europe, was also a fragment of the scattered painting. For the first time in two hundred years, the three surviving sections of the monumental family portrait, which must at the outset have measured nearly 3.80 metres long, are presented side by side on the occasion of this unique exhibition.

Frans Hals’s family portraits display a hitherto unprecedented degree of relaxation, demonstrating the intimacy of relations between parents and their children. The children interact joyfully amongst themselves. Smiles and laughter were Hals’s trademark; the artist’s genius is also illustrated in the other paintings in the exhibition: Family Group in a Landscape from the Museo Nacional Thyssen-Bornemisza (Madrid), the Dutch Family from the Cincinnati Art Museum and the Family Group in a Landscape from the National Gallery, London.

Echoing Frans Hals’s paintings, the Fondation Custodia presents a selection of preparatory drawings for family portraits, executed by seventeenth-century Dutch and Flemish artists. Although no drawings by Hals himself are known, these works throw light on the artistic challenges which confronted portrait painters when they had to represent a family group. These sheets form a transition to the second exhibition, Children of the Golden Age. Works from the Fondation Custodia.
“Children of the Golden Age”

Children are central figures in family portraits, and they also form a separate subject for many seventeenth-century Dutch and Flemish painters, a subject that has lost none of its appeal to the twenty-first-century eye. By turns charming, demonstrative, tender, well-behaved or amusing, innocent or unbearably noisy, these children of the Golden Age create an astonishingly timeless gallery.

The exhibition includes drawings, prints and paintings, offering visitors a wide-ranging overview of the subject of the representation of children in seventeenth-century Holland and Flanders.

Individual portraits of children predominate: from the charming girl by Nicolaes Maes, to the iconic effigy of Hugo Grotius who, from the height of his sixteen years of age, already surveys the world with a serious gaze; from little Jenneken busy writing, drawn in red chalk by her brother Harmen ter Borch, to the delightful portrait that Hendrick Goltzius engraved of the son of one of his best friends. These last three portraits represent children who can be identified by the inscriptions they bear; other depictions however – like the one painted by Nicolaes Maes – contain no identification of the model.

Artists often portrayed children while they are sleeping. Sleep is a state that occurs regularly with all children, and it is no surprise to see Frans van Mieris’ drawing of Willem Paets, the son of one of his friends, asleep in his cradle. In the drawing by Govert Flinck, one of Rembrandt’s best students, we have a magnificent study, almost certainly drawn from life, of a sleeping boy. Here, the innocence and vulnerability of childhood are strikingly represented.

Rembrandt also frequently drew and etched children, often as they interacted with women (mothers, grandmothers, nurses), or with the features of the young apprentices in his workshop.

In addition to these well-known sheets, the exhibition also contains a large number of items from the Fondation Custodia’s collection which have never been shown before, as well as some recent acquisitions. The way Dutch and Flemish artists of the 17th century looked at children and childhood offers today’s viewer both a glimpse into a bygone era and a mirror for our own perceptions on the first years of life.

This summer, alongside Frans Hals’s family portraits, the Fondation Custodia presents works by the Dutch painter and graphic artist Marian Plug (born 1937). The rooms in the lower ground floor host watercolours and prints produced by her over the past sixty years, as well as a selection of twenty-one recent oil paintings.

The choice of Marian Plug’s works for the exhibition is based on the evocation of nature. Mountains, forest, rocks and plenty of water. Plug is a latter-day romantic landscape artist: she uses more or less the same ingredients as Caspar David Friedrich two centuries ago, but in her case, they become more pictorial forms than conveyors of meaning. A beach in the evening provides a pretext for the juxtaposition of a cold midnight blue with a warm pink. An artificial lake is first and foremost an intense blue shape that gradually grows lighter. A bush, an explosion of yellow.

Marian Plug paints her watercolors directly from nature, often during her holidays in France, Spain or Great Britain. The paintings however are all independent works. Each has its own origin, sometimes inspired by a memory. They are reconstructed later in the studio, from her imagination. ‘When I am outside, I cannot think straight’, she explains in the catalogue. ‘My attention is drawn to what I see. Painting in the studio is quite different.’

A landscape of the South of France will give above all the impression of ‘scorching summer’. A rainbow arches like a sculpture in the landscape, ‘its feet plunged into the grass’. A wave is a ‘trumpet of foam in a rough sea’. A high waterfall in Ireland becomes a flash of white lightning, shining even as night falls.

‘I am not an abstract painter’, Marian Plug claims, ‘I need representation. But I use it. The painting emerges out of figuration’.