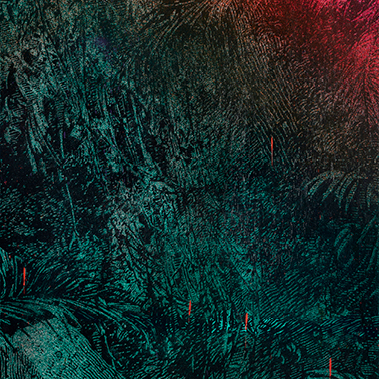 The exhibition De feu et de pluie (Fire and Rain) was conceived and produced by the Clément Foundation in partnership with the DEAL and the Regional Natural Park of Martinique in the context of Martinique’s candidacy to the UNESCO World Heritage List.

“The title refers to the two sides of the same gestation: for Martinique is indeed the daughter of the smoking bowels of the earth and the rains caused by the volcanic relief, giving birth to tropical rainforests.

The volcano impacts human life far beyond science and disasters. For this exhibition the artists were asked to work on the volcano and the eruptive process as a metaphor, even the essence of creation. Six works were created for the exhibition: the installations Respè twa fwa by Christian Bertin, Composition Tellurique by Hervé Beuze, Sismographie Méga-poétique by Julie Bessard, Tropical Bliss by David Gumbs, Le jour d’après (The day after) by Ricardo Ozier-lafontaine and the triptych Un démiurge (A demiurge) by Jean-Baptiste Barret. The other works were chosen according to this parallel between construction/destruction/reconstruction by man and by the volcano. The works speak of memory, of chaos, of spurts and tremors, of exchanges of energy, of the magma that fuses, of the burning heat, of the state of the world the moment after.

The exhibition is presented in the Cuverie and the Salle Carrée. The two rooms evoke both the physical and human eruptive process. In the cuverie the landscape and the physical aspect dominate, but references to colonial history and to individual and collective memories abound. In the square room, the human aspect, the stories woven by man, including mythology, resilience, the relationship to the volcano, as to the man-volcano, dominate, always immersed in the landscape.

In the hall, old paintings, engravings and postcards, of Mount Pelee, its tropical vegetation, the city of Saint-Pierre and the 1902 disaster form a prologue to the exhibition. These images, reproduced countless times, introduce the idea of a familiar landscape, made of fire and rain.

16 contemporary artists, almost 70 works (including an installation of 40 drawings), form a spatial narrative, without beginning, middle or end, of which the public is the only organizer. An exhibition like an open work, polysemic, susceptible of a multiplicity of approaches.

The works are engaged, acting. They stand up, oppose, denounce. Like an eruption, they modify the space, fertilize the imaginary, announce new ways of thinking the world. And above all, they participate in the creation of new narratives. They are bearers of hope, like these small glimmers of fireflies of which Didi-Huberman speaks, so fragile, but so alive, that if they disappear here, it is for better appearing further. ”