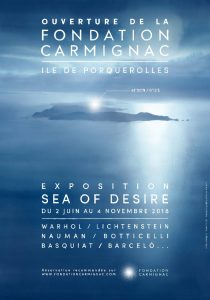 The phrase SEA OF DESIRE, written in sprawling letters on a large-scale painting by Ed Ruscha, greets the visitors at the end of their journey through the Porquerolles forest. ‘Words have temperature’, states the artist, ‘When they reach a certain point and become burning words, then they appeal to me….’. The ’word temperature’ of SEA OF DESIRE is hot, boiling over with ambiguous meaning. On the one hand, this sentence expresses the Eros drive and our desire for beauty. On the other, it contains our irresistible attraction to drama and potentially, destruction.

These two contrary and inseparable predilections sit at the heart of a literary masterpiece, written not far from Porquerolles, at Sanary sur Mer, in 1931: Brave New World by Aldous Huxley. This science-fiction novel anticipated profound social changes due to new technologies, propaganda and mind control. Thirty years later, Huxley revisited his novel and reassessed that the world was fulfilling his prophecy in high-speed: a seductive world entertaining for the masses, but rotten and manipulative under the surface.

Fifty years ago in France, in May 1968, there was an awakening. The outbursts meant protest, civil disobedience, as well as newfound freedoms and the upheaval of old rules and systems. The exhibition SEA OF DESIRE does not throw paving stones, as in the May 1968 movement, but it does confront the viewer with artworks that challenge their appetite for revolt, freedom and beauty.

SEA OF DESIRE is devised as a journey guided by the thread of desire, which visitors must follow in order to lose themselves, from the first staircase that leads them beneath the surface. Rebellious iconic artists are in dialogue with each other throughout the eight chapters that structure the exhibition, from ‘Pop Icons Reloaded’ to ‘Brave New World Revisited’, including Sandro Botticelli, Roy Lichtenstein, Andy Warhol, Gerhard Richter, and Jean-Michel Basquiat, along with younger artists who’s artistic voices are no less loud and clear.