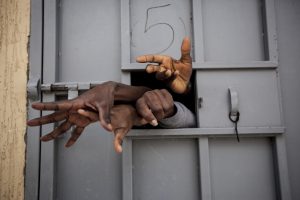 Narciso Contreras is the  7e winner of the ‘Lauréat du Prix Carmignac du photojournalism’ with his series (and recently published book) ‘Libya: A Human Marketplace’.

Throughout his series, Narciso Contreras, a documentary photographer born in Mexico City in 1975, shows  how, instead of being a place of transit for migrants on their way to Europe, Libya has become a trafficking market – a place where people are bought and sold on a daily basis.

In the heart of post-Gaddafi Libya, illegal migrants, refugees and asylum seekers are at the mercy of a complex human trafficking industry that is tolerated, informally, by the country’s many militia. Held in detention centres, these people; are subjected to inhumane conditions – overcrowding, lack of sanitation, vicious beatings.

Contreras grappled with complex and at times surreal bureaucracy and logistics, picking his way through areas torn apart by sectarian violence in order to visit detention centre after detention centre.Frustrated by the government’s unwillingness to grant him access, Contreras was forced to circumnavigate the official channels and cultivate his own contact with people smugglers and tribespeople.

The Carmignac Photojournalism Award was launched in 2009 with the aim of supporting and celebrating photojournalism. This unique Award funds an emerging photographer to visit areas of the world at the center of geostrategic conflicts, where human rights and freedom of speech are often violated. The Award is distinct from other photography prizes due to its emphatic global concern and specific geographical focus, which changes annually. Previous themes include Gaza, Pashtunistan, Zimbabwe, Iran and lawless areas in France.

In keeping with the values of courage, independence, openness and sharing which motivate its personnel, Carmignac has committed to champion the personal view which is, for this reason, essential.