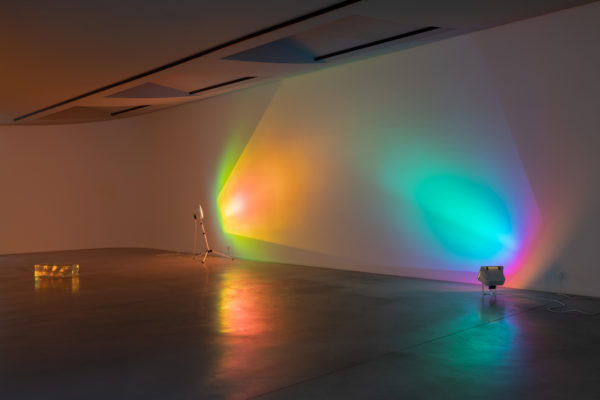 In Avignon, the artist presents an installation that responds to a selection of unpublished works by Dan Flavin (b.1933 – d.1996, New-York, USA). In Saint-Paul-de-Vence, her work reflects this project and is in line with the minimal and conceptual aesthetics put forward by Fondation CAB.

The title of this exhibition – 5766 chemin des Trious – evokes the promise of an unprecedented art experience, of an encounter whose contours we visualise as soon as we set off to reach the chosen destination, simply by giving the exact address of the venue in Saint-Paul-de-Vence, 5766 chemin des Trious.

In a series of works, light is experienced in different states: diffused, reflected, absorbed, projected and transformed. In the large exhibition space, projections of coloured dichroic light overwhelm the spectator, who is placed in a situation where body and mind are constantly oscillating between contemplation and immersion. The sensory experience continues between the infinitely reinvented dissolution and dissolution on the garden floor where the installation of two aquariums gives the illusion of materiality.

The crucial role played by the spectator in these works, which jubilantly echo some of the emblematic artists of the new avant-garde of the 1960s and 1970s, of which Fondation CAB has preserved important testimonies, makes Ann Veronica Janssens’ work “an unfolding of light as a tool, a material, a science and a symbol of the space we share, and one that takes us out of our routine relationship to that space” (Mieke Bal).