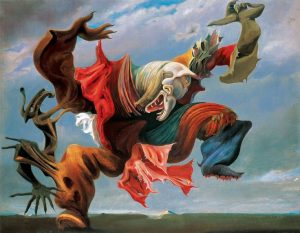 The third and final exhibition of our collection, marking the 20th anniversary of the Fondation Beyeler, dares to take a look into the future. It celebrates the museum’s cooperation with private collections, as well as with artists and their estates. Cooperations shows, by example, how our collection can be supplemented and augmented by potential donations or long-term loans. Of the more than 170 works of art and historical objects on view, dating from the 16th to the 21st century, about half come from distinguished partners who are closely allied with the Fondation Beyeler. The temporary joining of superb and rarely exhibited works with famous pieces from the Beyeler Collection enables the public to imagine an ideal museum, a musée imaginaire.

The exhibition begins with a Wunderkammer or Kunstkammer, which is evocative of the origins of the contemporary museum. The following rooms recall the salons of the intellectual elite frequented by Degas, Matisse and Picasso, as well as the historical and experimental presentations of the Surrealists led by André Breton. They provide examples of how modern art was originally exhibited. In the second half of the 20th century, rooms painted in a neutral white advanced to become the standard that still dominates museums and galleries today. Here, in a variation on this “white cube,” artists of Abstract Expressionism, Zero and Pop Art enter into a dialogue with one another. In addition, rooms are devoted to artists Louise Bourgeois, Gerhard Richter, and Peter Doig. The beginning and end of the exhibition are formed by works by Maurizio Cattelan and Felix Gonzalez-Torres, while the midpoint is marked by Marina Abramovic. As a whole, the exhibition is shaped by artists who have established new ways of presenting art.

The exhibition was curated by Sam Keller and Ulf Küster, Fondation Beyeler.