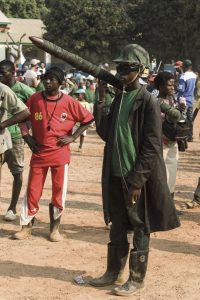 Links between the Democratic Republic of Congo and Belgium are constantly disconnecting and reconnecting what with countries awaiting democratic elections, decolonisation and the opening of the Africa Museum. The Fondation A Stichting has chosen to invite the artist Georges Senga, born in 1983 in Lubumbashi. The exhibition brings together three major works produced between 2012 and 2016, Une vie après la mort (Life After Death), Kadogos, Cette maison n’est pas à vendre et à vendre (This House is not For Sale and For Sale), as well as two new ongoing projects. Blending fictitious content and documentary elements from a violent post-colonial history, one of children thrown into the war by the fierce struggle for power, one of family conflicts or attempts at illegal appropriation, Georges Senga reflects upon our perception of his country. From his personal background, a thread where the past and future converge, he attempts to gather and reclaim the scattered pieces of a puzzle so as to reclaim a history, a cultural heritage.

The artist is participating in the upcoming exhibition Multiple Transmissions: Art in the Afropolitan Age at WIELS, Contemporary Art Centre in Brussels and in the exhibition Rebel Livesat FOMU, Fotomuseum Antwerpen in June 2019.