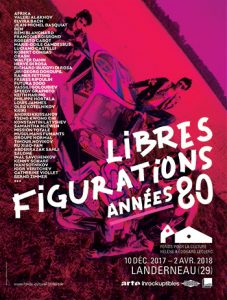 “Libres Figurations – années ’80” tells the different episodes of this story and is a testimony to this academic, often challenging art, inspired by popular culture, born in the streets, in the clubs, in the journals as well as in workshops and who maintains a link very hard with the punk rock scene and the band picture.

At the heart of its design is the dialogue maintained by the Commissioner with the artists or actors of the free images for the choice of works that come from international museums, private collections or are on loan from the artists themselves in order to create a live event reflecting the reality of this international movement.