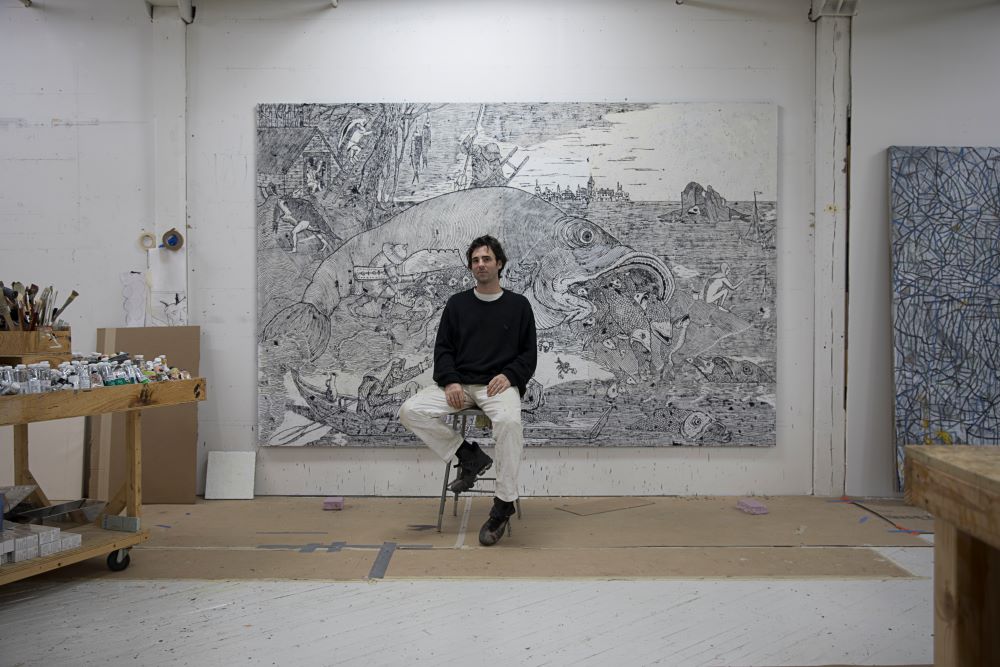 Faurschou Foundation announces the opening of Bag of Candles, the first solo exhibition in China by Zachary Armstrong, comprising his characteristic wax paintings, pottery, sculpture, and installation work. The exhibition is Armstrong’s largest to date and presents the full spectrum of his wide-spanning practice to a new audience.

For the exhibition, Armstrong has created a new body of work, transforming Faurschou Beijing’s space into a personal microcosmos of cross-references to his own life and American culture. These new works include a walk-in model of an encaustic house, a bronze cast of a life-size T-rex skull, an extensive wall-installation, and new paintings. The works allude to Armstrong’s own life and childhood, as well as popular culture and art history, creating dialogues with one another while also commenting on contemporary society.

With the installations, such as the house and the T-rex skull, Armstrong builds on inspiration from his own life and childhood, but plays with a universal subject—the recognizable and safe environment of a home, full of fond memories, but also disturbing elements that, all together, make up a life. The extensive wall-installation consists of shelves clustered with bags of wax candles, pots, lamps, sketches, and drawings. The wax candles make up the heart of the exhibition, as wax is the key material in many of the works:

“The candles are a symbol of childhood memories. I collected them and a lot of other things as a child. At the same time, they also serve as a symbol of the obsessive collecting, which is inherent in the exhibition and the contemporary world at large,” Zachary Armstrong says.

The four large paintings in the exhibition demonstrate the extent to which Armstrong masters the ancient technique of encaustic painting, where he applies layers of hot beeswax mixed with pigments. The technique was revived and popularized by artists such as Jasper Johns, Jackson Pollock, and Lynda Benglis. In two paintings, Armstrong sheds light on artists from American popular culture: Norman Rockwell and Ian Miller. In another, he makes a reference to the Renaissance painter Pieter Bruegel. The last large canvas is inhabited by a recurring motif in Armstrong’s practice: the great dinosaur.

Zachary Armstrong (b. 1984) lives and works in Dayton, Ohio. Armstrong’s art is about personal storytelling, rooted deep in his childhood, his family, and also the American province, folk art, natural history, and literature.

In his work, Armstrong often makes strong references to popular culture and uses children’s drawings as his outline, both those of his own making and his friends’. These images are transformed into large-scale works, with various motives being repeated throughout several series of paintings and sculptures.