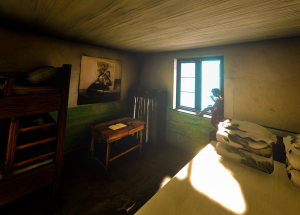 When entering Yu Hong’s Virtual Reality experience, the viewers will witness four scenes, which follow the coming of age of a female character. As the character moves forward in her own development, the events around her flow backwards in time. Each scene is hand-painted, the first depicting the birth of the protagonist and the last ending with her burial. Whereas the birth takes place in modern times, the following scenes take the protagonist and the viewers further and further back in time, until they reach the earliest known period of Chinese history.

Yu Hong was born in 1966 in Xi’an, China. In the 1980s, she studied oil painting at the Central Academy of Fine Arts (CAFA) in Beijing, and graduated with a post-graduate degree from the oil painting department in 1996. Since 1988, she has been a teacher in CAFA’s oil painting department. The core subject of Yu Hong’s paintings has always been human nature, with a focus on the growth and existence of a particular society and the world at large. Yu Hong’s painted figures express the feelings and self-analysis of people thrown into the reality of society. The spirit of Yu Hong’s creation most often arises from her personal life and the surroundings of quotidian existence, constructing a world which ingeniously fuses together perceptions of time and memories, as well as adeptly seizing the sporadic emotional evolution of human experience. Recent solo exhibitions include Suzhou Jinji Lake Art Museum (Suzhou, China), CAFA Art Museum (Beijing, China), and Long Museum (West Bund, Shanghai, China). Yu Hong has also had solo exhibitions at Loft Gallery (Paris, France) and Goedhuis Contemporary (New York, NY, USA), and has participated in group exhibitions around the globe.