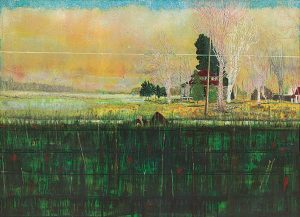 ‘Cabins and Canoes: The Unreasonable Silence of the World’ at the Faurschou Foundation is the first solo exhibition in China dedicated to one of the most important painters of our time, Peter Doig.

The exhibition, a tightly-curated selection of the painter’s signature motifs: cabins and canoes, will feature some of Doig’s most celebrated paintings including, Swamped(1990), The Architect’s Home in the Ravine (1991), and Daytime Astronomy (1997-8).  The paintings will be juxtaposed with excerpts from Albert Camus’ writings to question the condition of human experience as explored in Doig’s practice.

Doig’s itinerant past, moving throughout his childhood and early adult life from Edinburgh to Trinidad and then Canada to London, finds a keen expression in two consistent strands of imagery in his work: cabins and canoes. For Doig, these motifs are more than recollections of his travels. They are the vehicles through which he seeks to dramatize the workings of memory itself.

A centrepiece of the exhibition Daytime Astronomy (1997-98) captures a moment of profound revelation: as a seventeen-year-old boy, working on Canada’s wide-open Western plains, it is the moment that the artist first became aware of the void that separates man from the world around him. A symphony in paint, the surface of Daytime Astronomy projects the hallucinogenic experience of not only watching the sky – but also of remembering it.

Like the cabins, the canoes function as metaphors for memory. However, if the cabins embody the human struggle to recapture specific moments, the canoes are vehicles for re-enacting drifting states of consciousness. Swamped (1990) is a shifting boat and its lone inhabitant are subsumed by a swirling painterly vortex that disperses like cloud formations across the surface.  The canoe gleams from the midst of lagoon, illuminated by the white glow of moon above. All around it, Doig weaves a surging pool of matter that moves seamlessly between lucid reality and abstract delusion.