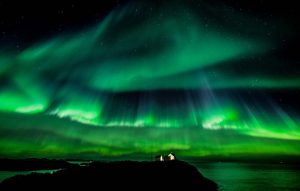 Faurschou Art Resources and KaviarFactory present Yoko Ono: ONOCHORD (lighthouse) at Henningsvær Lighthouse, a new installation by the artist in the archipelago of Lofoten, Norway. A livestream from Henningsvær will make it visible throughout the world.

Yoko Ono is one of the great artists of today, renowned for her instruction pieces, installations, and films. Yoko Ono is also known as a musician, singer and peace activist. ONOCHORD is an instructional work by the artist, in which she invites everyone to send the message “I love you” to each other, around the world and to the universe. The message is sent through Yoko Ono’s own code called ONOCHORD, consisting of a series of light flashes: I (one blink) Love (two blinks) You (three blinks).

For the first time the ONOCHORD message will be sent from a lighthouse. From January 20 through February 28, 2018

‘the lighthouse at Henningsvær, situated north of the arctic circle, will send out the ONOCHORD message continuously 24 hours a day. Surrounded by Northern lights, darkness, white mountains, and the sea, the message emitting from the lighthouse is not only a message from person to person, but also from people to the planet. In the words of the artist: “There is so much fear, confusion and anger in the world and it’s nice to have a moment when we think of love, instead of anything else” (Yoko Ono).

In connection with the opening of the lighthouse installation, Yoko Ono’s film ONOCHORD(2004) and ONOCHORD (documentary, 2005) will be screened at the KaviarFactory in Henningsvær. Originally shown at OPENASIA, during the Venice Film Festival in 2004, ONOCHORD encourages everyone to join in and send the message “I love you” to everyone, everywhere on the earth and beyond. Watch out, a flash of love is coming your way.

KaviarFactory is a former caviar factory in Henningsvær turned into an international venue for contemporary art. Located in Henningsvær, it takes advantage of its off-the-grid location and aims to offer experiences and confrontations that never previously have been available to such regions. The KaviarFactory is owned and run by Venke Hoff and Rolf Hoff, who also own the lighthouse in Henningsvær.

ONOCHORD (lighthouse) at Henningsvær Lighthouse is produced by Faurschou Art Resources in collaboration with KaviarFactory, and curated by Luise Faurschou and Jon Hendricks, Yoko Ono’s curator of exhibitions

Livestreaming will be available from January 20 (5pm CET) at: