Estorick ‘The Art of Campari’ 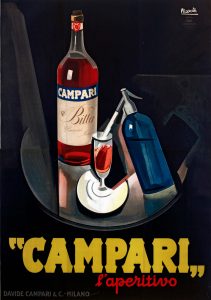 Since the nineteenth century, Campari has been responsible for some of the most distinctive and innovative imagery created in Italy. This exhibition will trace the history of Campari’s pioneering approach to advertising its iconic ruby-red aperitivo. Drawn from Campari’s extensive archives in Milan, the show features the original Belle Époque posters, looks through the revolutionary campaigns of the 1920s, and culminates in the elegant designs of the 1960s. This exhibition celebrates Campari’s rich heritage in creativity and design, showcasing the ground-breaking advertising and packaging designs responsible for establishing and maintaining unrivalled global recognition for the brand.

Founded in Milan in 1860 by Gaspare Campari (1828-1882), it was under Davide Campari (1867-1936) that the company pursued a more dynamic approach to marketing its products, harnessing the new power of the advertising poster. Aiming to create a sophisticated brand profile, during the early 1900s Campari worked with some of the most celebrated poster designers of the day: Leonetto Cappiello, Marcello Dudovich, Adolf Hohenstein, and Marcello Nizzoli. Initially attuned to the aesthetics of Art Nouveau, it was the pioneering campaigns created by the Futurist artist Fortunato Depero from the mid-1920s onward that became Campari’s most celebrated commissions. Populated by his trademark puppet-like characters, Depero’s bold, witty and geometric designs modernized Campari’s look, creating an unmistakable visual identity. Depero’s drawings were also used as the basis of the famous conical Campari Soda bottle, launched in 1932. Depero’s belief that the publicity poster would be ‘the painting of the future’ continued to be reflected in Campari’s post-war commissions, which included elegant and vibrant designs by figures such as Franz Marangolo and Bruno Munari, epitomizing the spirit of the ‘Swinging Sixties’. The show features posters and designs by some of the most influential artists working for the company, as well as original sketches by Depero, complemented by objects including crates, glasses, bottles, plaques and other ephemera.