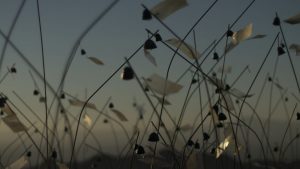 This presentation has been produced in the framework of the Fondation Louis Vuitton’s “Hors-les-murs” program, showcasing previously unseen holdings of the Collection at the Espaces Culturels Louis Vuitton in Tokyo, Munich, Venice and Beijing, thus carrying out the Fondation’s intent to realize international projects and make them accessible to a broader public.

Since 1967, Boltanski has developed an artistic style that embraces writing, film, sculpture and photography. With a focus on remembrance and time, he works with biographical milestones and references, from both his own life and the lives of unknown or unidentified persons. Without seeking to supplant historians, he follows the twisting paths of individual and collective destinies using personal and impersonal elements of everyday life.

The Espace is honoured to present a selection of works by this leading figure in contemporary art, considered as France’s most influential living artist. Revolving around two video installations part of the Collection, Animitas (2014), and Animitas (Blanc) (2017), this new show brings together four pieces questioning the passing of time and plunging the viewer into a meditative atmosphere.

Animitas is one of the artist’s most ambitious recent projects: creating museum-like expressions within expanses of desert. Initially, it is an out-of-doors installation which consists of 800 Japanese bells on slender stalks. The wind bell is a traditional object in Japan, hung from a home’s window frame or doorframe, accompanied by a small piece of paper bearing a haiku. The first version of this installation was set in the most arid desert of Atacama (Chile) and echoed the configuration of the stars as seen in the skies of the Southern Hemisphere on the night of Boltanski’s birth: September 6, 1944. For the artist, the chiming of the bells evokes “the music of the stars and the voices of the floating souls.”

The same configuration of bells has been reinterpreted at three other sites: on the island of Teshima in Japan (La forêt des murmures, 2016), then near the Dead Sea (in the fall of 2017); finally, Animitas was installed on Quebec’s Île d’Orléans, in a white, snow-covered landscape, as portrayed in Animitas (Blanc). Doomed to disappear with time, this repeated installation blends Boltanski’s personal history with the stories of the places themselves.

Each installation is the subject of a video consisting of a single shot, from sunrise to sunset. For Espace Louis Vuitton München, Boltanski presents the films in conjunction with a flower bed and grey, crumpled papers, which evolve with the passage of time and people over the course of the exhibition. Between the two Animitas installations presented here, the words Départ and Arrivée glow along the visitor’s path, summarising what life is according to Boltanski: a departure, an arrival, separated by the passing time.

About the artist
Christian Boltanski (b. 1944 in Paris) lives and works in Malakoff (France). Since the 1970s, his work has been presented in numerous solo and group shows. Over the past year, his solo exhibitions took place in Amsterdam (the Netherlands), Tokyo (Japan), Edinburgh (UK), Valencia (Spain) or Monterrey (Mexico). He also participated in group exhibitions in international institutions such as the Jewish Museum (New York, USA), the Pinchuk Art Centre (Kyiv, Ukraine), the Mori Art Museum (Tokyo, Japan). He took over the 2010 edition of Monumenta in Paris (France) and represented France at the Venice Biennale in 2011. Among other prestigious prizes, he was the recipient of the Kunstpreis of the Nord/LB, Braunschweig in 2001 and the Praemium Imperiale Award of the Japan Art Association in 2007.