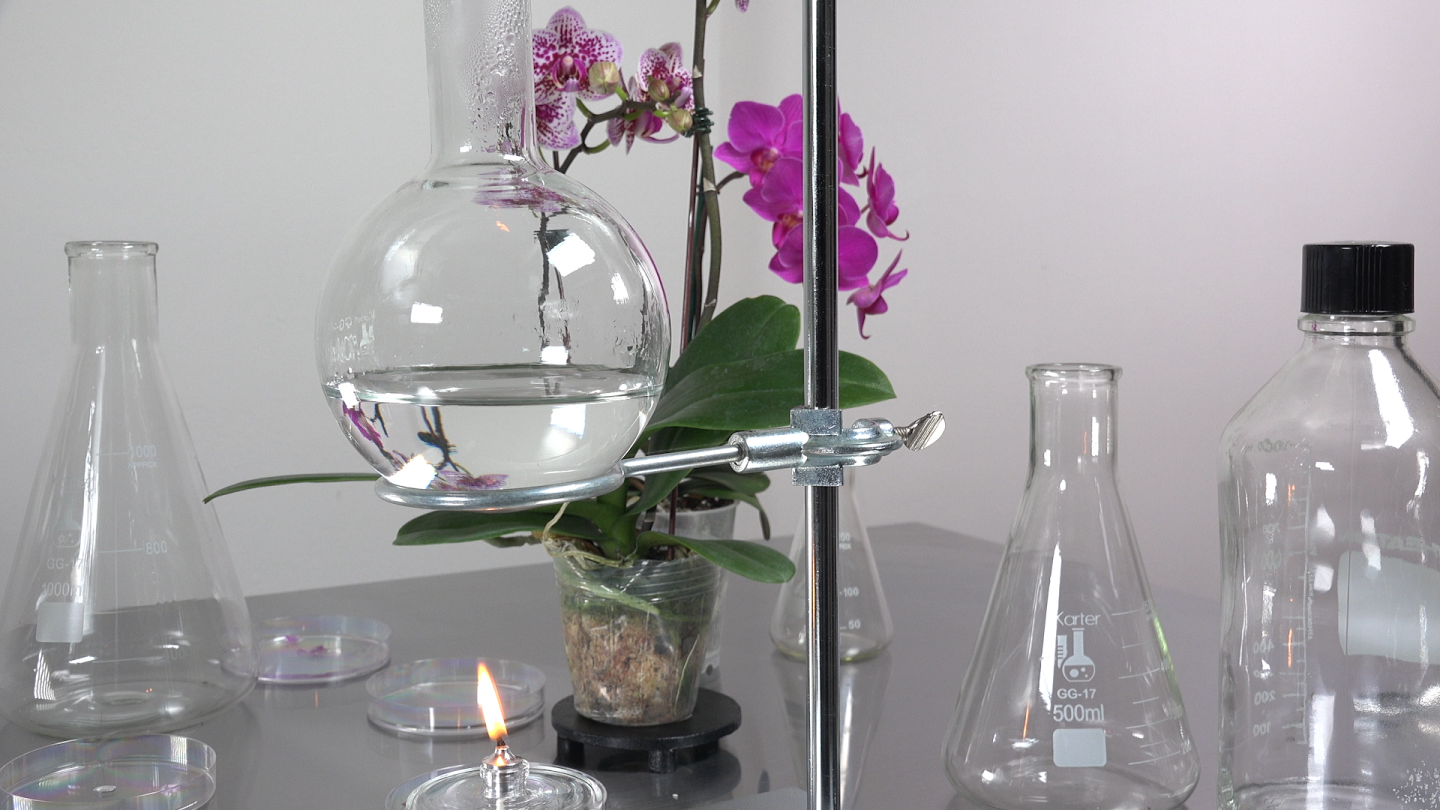 For its new exhibition, the Espace Louis Vuitton München invites you to uncover an emblematic work by Korean-American artist Anicka Yi, The Flavor Genome (2016). This 3D projection is displayed in conjunction with a work by American artist Trisha Donnelly. Both works, which belong to the Collection, are presented within the framework of the Fondation Louis Vuitton “Hors-les-murs” programme.

Born in 1971 in Seoul (South Korea), Anicka Yi examines the animal world, exploring the crossroads of species, hybridity and pollination. The Flavor Genome is an in-depth reflection on the union of plants and animals and the potential of artificial scents and flavours. Shot in 3D in Brazil’s rainforest, the film switches from scenes in which the artist compiles data (while strolling languorously in an orchid greenhouse or being ferried in a canoe), animated segments showing cells and microorganisms, and an anonymous scientist working on orchid petals in her laboratory. In addition, many surreal juxtapositions pair science-fiction memories with a decidedly biomedical scientific vocabulary, showing a perception of nature influenced by new scientific and technological advances, as well as resource depletion in the Global South caused by uncontrolled consumption in Western societies.

In parallel, the video Untitled (2008) is the fitting example of Californian artist Trisha Donnelly’s oeuvre. An iconic figure of the New York art scene, Donnelly develops a singular practice composed of hybrid forms populating a world that is at once strange and familiar, where scanned or filmed images are manipulated, moulded or shredded to the point of non-existence, resembling a living, malleable, sensitive organism exposed to every possible use by the artist. Through hypnotic projections, Donnelly challenges you to look beyond appearances, involving you in an intense sensory experience. All her works are named Untitled and never have the usual museum labels or explanatory blurbs nearby. Untitled (2008) is emblematic in this way: an enigmatic expression of incommunicability, featuring a surreal contemporary Internet collage, mixing rays of energy or lightning radiating from a rose, a photo of a woman in uniform smoking a cigarette, and a mysterious synthetic fog. Be it vision or reminiscence, this mental imagery creates a feeling of strangeness suspended in time.

Through a visual montage and the study of aromas, these two artists examine how senses and perception influence our behaviour—in the words of Anicka Yi, “a biopolitics of the senses.” This exhibition, confronting the two artists’ corollary oeuvres, shows intentionally strange and fantastic works, focusing on a natural world influenced by new technological and scientific advances.

About the Fondation Louis Vuitton
The Fondation Louis Vuitton serves the public interest and is exclusively dedicated to contemporary art and artists, as well as 20th century works to which their inspirations can be traced. The Collection and the exhibitions it organizes seek to engage a broad public. The magnificent building created by the Canadian-American architect Frank Gehry, and already recognized as an emblematic example of the 21st century architecture, constitutes the Fondation’s seminal artistic statement. Since its opening in October 2014, the Fondation has welcomed more than six million visitors from France and around the world.

The Fondation Louis Vuitton commits to engage in international initiatives, both at the Fondation and in partnership with public and private institutions, including other foundations and museums such as the Pushkin Museum in Moscow and the Hermitage Museum in Saint Petersburg, the MoMA in New York and the Courtauld Gallery in London among others. The artistic direction also developed a specific “Hors-les-murs” programme taking place within the Espaces Louis Vuitton in Seoul, Beijing, Munich, Venice and Tokyo, which are exclusively devoted to exhibitions of works from the Collection. These exhibitions are open to the public free of charge and promoted through specific cultural communication.