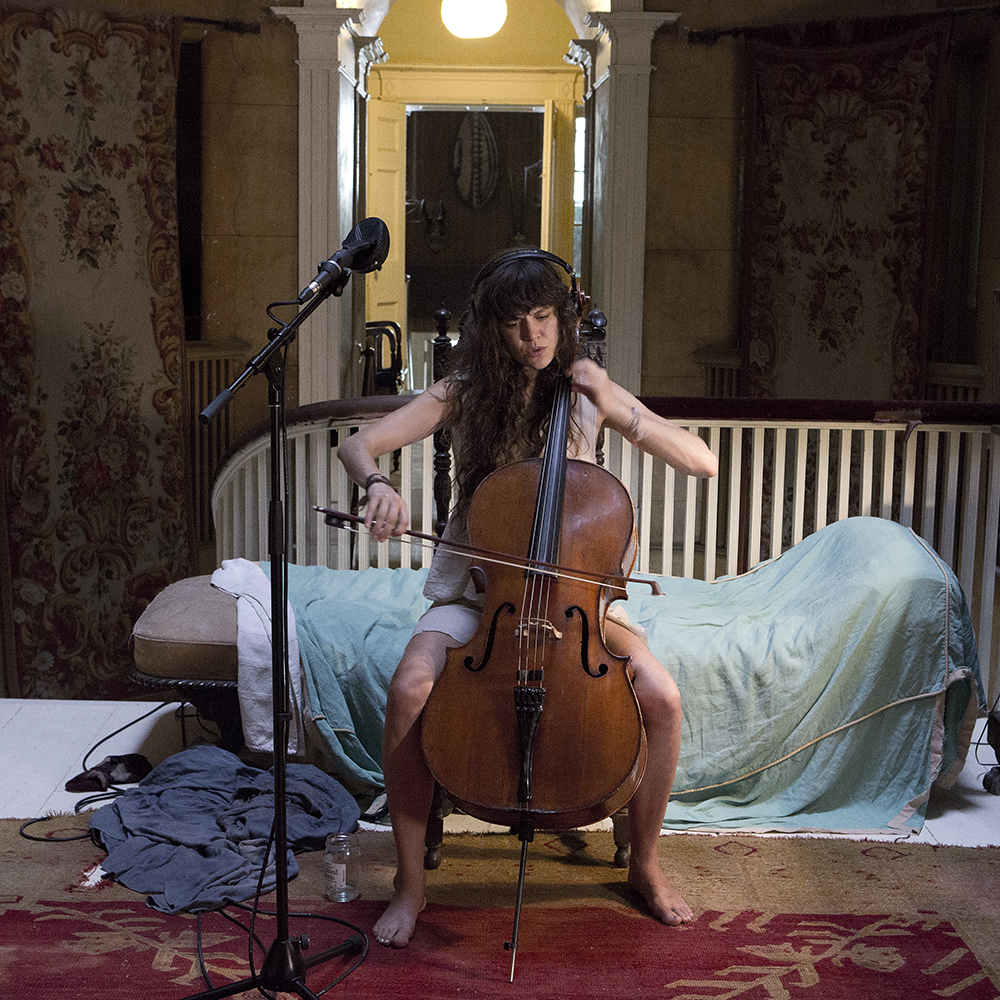 Ragnar Kjartansson, Stills from The Visitors, 2012.

Through elements of theatrical and musical production and an expanded sense of sculpture and painting, Ragnar Kjartansson creates performances that provoke the intertwining of pathos, joy, and communal emotion by testing the limits of repetition and the endurance of both performers and viewers. The figure of the musician is at the centre of these works, either acting alone as a kind of Romantic troubadour or as part of a cast of players. While some of these works happen live in front of an audience, Kjartansson is most well-known for recorded performances presented in the form of immersive video installations.

The Visitors is one such work: it is an enveloping nine-channel audio and video installation that documents an epic single-take musical performance. Lasting for approximately an hour, the piece depicts eight musicians (including Kjartansson) performing a folk music opus of repetition and cannon blasts, based on collaged texts by artist Ásdís Sif Gunnarsdóttir. The musicians, all friends of Kjartansson’s, include: Kristín Anna and Gyða Valtýsdóttir, solo performers, film composers, and founding sisters of the historic Icelandic band Múm; Kjartan Sveinsson, composer and keyboard player with Sigur Rós, Shahzad Ismaily who has worked on the Icelandic scene and with artists such as Will Oldham, Yoko Ono and Bob Dylan; Þorvaldur Gröndal; Ólafur Jónsson; and composer, jazz master, and frequent collaborator Davíð Þór Jónsson.¹

The performance is set at Rokeby; a large, dilapidated, nineteenth-century estate in upstate New York, with each performer occupying a separate room of the mansion. As the musicians inhabit and animate its storied interior, the faded splendour of Rokeby becomes a character itself. Enlivened by the emotional tenor of the performance, this bohemian mise-en-scène shifts into a pictorial and conceptual framing device. Eight of the screens feature an individual portrait of a solitary performer; and each of them sings and plays a different instrument—isolated, yet in unison. Citing the tension between loneliness and togetherness in the piece, Kjartansson describes the act of making music as a kind of “perfect society,” as when people perform together, they are both focused on themselves and simultaneously deeply invested in their fellow performers as everyone unites to create something.²

At the heart of this collaborative composition, which Kjartansson refers to as a “feminine nihilistic gospel song,”are the words that Gunnarsdóttir wrote for various performances and video works of her own but collaged together for a song by Kjartansson; they are lyrics that articulate what Kjartansson described as life’s “dazzling defeat,” but that also expand to reflect on the strength and persistence of affective ties, the instability of life, love, loss, and also a sense of radical acceptance. The insistent repetition of the lyrics transforms the performance into a kind of meditation that ebbs and swells, and alternates between the banal and the sublime. In complement to the lyrics is the ultimate camaraderie of the musicians of Rokeby, who invite us to follow along with them and remind us of our reliance on one another through the tragicomedy of life—and art.

The audio and video tracks were recorded individually but are shown together in such a way that the audience is placed at the centre of the arrangement, and in this way the music takes on a spatial, sculptural element. Installed in the exhibition space so that it is impossible to view the entirety of the work at the same time, the viewer is compelled to move through the gallery, navigating through sound, stopping to view each screen as a glimpse of a solo performance, and moving as the performers move, while assembling a unique, cohesive audio and visual composition. Just like the inhabitants of Rokeby, you, too, are a visitor here; an active part of this work as you mix the music in real time.

¹ The Visitors is based on a piece called The End—Rocky Mountains (2009), which Ragnar and Davíð Þór created at the Banff Centre for Arts and Creativity.

² Quotations from Ragnar Kjartansson are from a 2013 interview with Pirelli HangarBicocca, Milan, and correspondence with the artist.

Ragnar Kjartansson engages multiple artistic mediums, creating video installations, performances, drawings, and paintings that draw upon myriad historical and cultural references. An underlying pathos and irony connect his works, with each deeply influenced by the comedy and tragedy of classical theatre. The artist blurs the distinctions between mediums, approaching his painting practice as performance, likening his films to paintings, and his performances to sculpture. Throughout, Kjartansson conveys an interest in beauty and its banality, and he uses durational, repetitive performance as a form of exploration.

Kjartansson (b. 1976) lives and works in Reykjavík. Major solo shows include exhibitions at the Kunstmuseum Stuttgart; The Metropolitan Museum of Art, New York; the Reykjavík Art Museum; the Barbican Centre, London; the Hirshhorn Museum and Sculpture Park, Washington; the Musée d’art contemporain de Montréal; Palais de Tokyo, Paris; New Museum of Contemporary Art, New York; Migros Museum für Gegenwartskunst, Zurich; Fondazione Sandretto Re Rebaudengo, Turin; Institute of Contemporary Art, Boston; and the Carnegie Museum of Art, Pittsburgh; among others. Kjartansson participated in The Encyclopedic Palace at the Venice Biennale in 2013, Manifesta 10 in St. Petersburg in 2014, and he represented Iceland at the 2009 Venice Biennale. The artist received the 2019 Ars Fennica Award, and was the recipient of the 2015 Artes Mundi’s Derek Williams Trust Purchase Award, and Performa’s 2011 Malcolm McLaren Award.