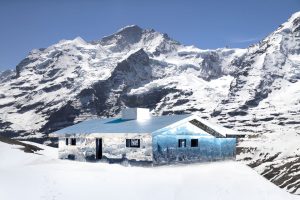 Elevation 1049 is pleased to announce its third winter iteration, Frequencies, curated by Neville Wakefield and Olympia Scarry. Launching over the weekend of February 1-3, 2019, Elevation 1049: Frequencies will feature Mirage Gstaad, a new outdoor site-specific sculpture by Los Angeles-based artist Doug Aitken that will remain on view in Gstaad over the course of two years, reflecting and interacting with the mountain landscape over the changing seasons.

Time and space are the measures of all landscape and the idea of frequency carries that measure within its dual meanings. Frequency is both the rate at which something occurs or is repeated over a given period of time or in a given sample, and also, the rate at which a vibration occurs that constitutes a wave, either in a material (as in sound waves), or in an electromagnetic field (as in radio waves and light), usually measured per second. The third edition of Elevation 1049 invokes both of these ideas.

Mirage Gstaad by Doug Aitken uses the frequency of light to reflect the sublime Alpine landscape as part of a continually changing encounter in which land and sky, subject and object, inside and outside are in constant flux. Standing in contrast to the surrounding chalet’s the ranch-style structure suggests a latter-day architectural version of Manifest Destiny, the westward migration that began in Europe and finally settled in California. With every available surface clad in mirror, it both absorbs and reflects the landscape around in such ways that the exterior will seemingly disappear just as the interior draws the viewer into a never-ending kaleidoscope of light and reflection.

Frequencies propose a dialogue between the semi-permanent structure of Mirage and transitive and ephemeral nature of performance. Exploring ideas that range from the acoustic structure of landscape itself to the healing properties it has conferred upon its residents, from ideas of beauty and destruction to future-shock they will activate the storied as well as the lesser-known spaces of Gstaad and the surroundings both inside and outside. Where Mirage plays to a reflected landscape as it is beamed across social media so the program of performances brings to Frequencies the intimacy of unrepeatable personal encounter.

Produced by Luma Foundation in collaboration with The Store X Vinyl Factory.