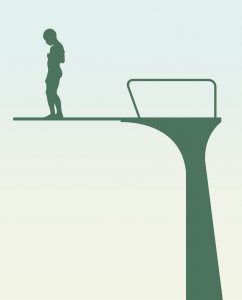 The Berlin-based artist duo Elmgreen & Dragset has created the site-specific sculpture Dilemma which depicts a six-year-old boy standing at the edge of a classic diving board. Situated on top of a hill with the boy and diving board facing the Oslofjord, their positioning creates the illusion that he is about to leap into the fjord. In Elmgreen & Dragset’s words: “Perched at the edge of the board, the boy’s crouched posture indicates that he is simultaneously excited and apprehensive about the potential jump.” The young boy serves as a metaphor for growing up and the uncertainty behind the decisions, actions and expectations that follow the steps into adulthood.

Dilemma is Elmgreen & Dragset’s first public sculpture in Oslo. The work continues the duo’s ongoing engagement with the theme of childhood, as seen in many of their past works including Powerless Structures, Fig. 101, a sculpture of a boy astride his rocking horse which was first shown in 2012 atop the Fourth Plinth in London’s Trafalgar Square. Another recurring symbolic element in Elmgreen & Dragset’s artistic practice is the diving board, a motif the artists first introduced twenty years ago, in 1997, with Powerless Structures, Fig. 11, a diving board penetrating a panoramic window at the Louisiana Museum of Modern Art in Humlebæk, Denmark. The perspective of this permanently installed work overlooking the sea parallels that of Dilemma facing the fjord.

Elmgreen & Dragset have worked together since 1995 and have a long history of working in public space. Most recently in 2016 their sculpture Van Gogh’s Ear, an upright handcrafted swimming pool, was on view in New York’s Rockefeller Center, playfully contradicting expectations of both this familiar object and iconic site. Like several of Elmgreen & Dragset’s past public artworks, and unlike many other public sculptures that celebrate heroic acts, Dilemma celebrates an everyday scene that, however brief, can still be of existential importance.

Dilemma is the latest addition to Ekebergparken’s art collection and its tenth site-specific installation. Other site-specific works have been conducted by Marina Abramovic, Jenny Holzer, Tony Oursler and George Cutts.