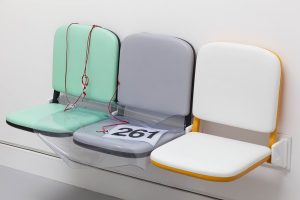 “She sees the shadows… she even counts the tree-trunks along a promenade by the shadows, but sees nothing of the shape of things.”*

In 1886, a 22-year-old woman in Lyon saw the world around her for the first time. Objects that had been instantly recognisable by touch were hard to distinguish with her new sight, and shadows appeared more concrete than solid forms. Testimonies by the patient and her doctors describe the sudden strangeness of familiar environments, and her singular experience of the world as a newly sighted person.

This exhibition explores shifts in perception of objects and materials from contemporary daily life. Artists have looked again at familiar items –  a bench, a plug socket, some railings, a broom – and invite viewers to see alternative qualities and narratives. On the occasion of the exhibition, a new publication combines commissions by writers Orit Gat, Sally O’Reilly and Claire Potter, and visual responses to the project by artists David Birkin, Jason Dodge, Marine Hugonnier, Marlie Mul, Magali Reus and Douglas White.

*M. Von Senden (trans. P. Heath), Space and Sight: the perception of space and shape in the congenitally blind before and after operation, 1932, Methuen & Co. Ltd.: London, 1960.