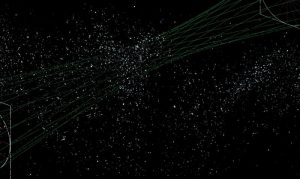 This new commission by Rita McBride, titled Particulates (2017), is inspired by time travel, the principles of light and space, and quantum physics. The materials of McBride’s Particulates include water molecules, surfactant compounds, and the beams of high-intensity lasers. Her use of light as a sculptural medium marks a departure for the artist who has explored the tension between architectural and sculptural form in her extensive oeuvre since the mid-1980s. Particulatesexchanges gravity, a core element in sculpture, for the potential of infinitely traversable space. It unfolds a wrinkle in time.

Rita McBride was born in Des Moines in 1960. She currently lives and works in Los Angeles and Düsseldorf.