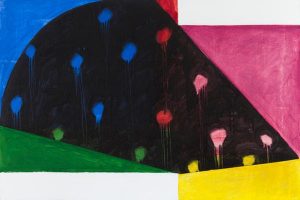 In the early 1970s, Mary Heilmann (1940) began creating art that harnessed everyday domestic objects, repurposing them with a boldly hand-painted touch. Arriving in New York in the late 1960s, she was energized by the artists occupying the Minimal and Postminimal art scene. Heilmann’s encounters with the work of artists closely associated with Dia’s history, such as Dan Flavin and Donald Judd, made a significant impression while also delineating a clear difference between their practice and her approach.

This exhibition at the Dan Flavin Art Institute in Bridgehampton, New York, presents paintings and ceramics that mark milestones in Heilmann’s practice to date. The presentation includes paintings from the early 1970s just after the artist arrived in New York City, alongside works from the late 1980s when she began visiting the East End of Long Island. Heilmann eventually set up her own studio in Bridgehampton, where all of her paintings and many of her ceramics have been made since 1999. Several recently finished works that have not been seen outside of her studio are included in this selection in addition to recent ceramic works.