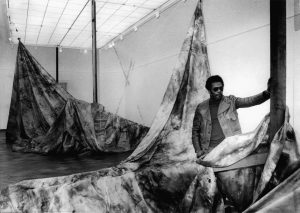 Dia Art Foundation presents an exhibition of Sam Gilliam’s early work from the 1960s and 1970s at Dia:Beacon in Beacon, New York. Installed alongside Dia’s permanent collection, this presentation situates practice in dialogue with that of his Minimal and Postminimal peers, such as Robert Ryman and Anne Truitt, who, like Gilliam, considered painting in an expanded form. One of the most important figures in American abstract art he emerged from the Washington, DC, cultural scene in the 1960s alongside Truitt. Setting himself apart stylistically from Washington Color School painters, with whom he is often associated, the artist incorporated a beveled edge and experimented with suspension as two distinct methods of working with canvas.

The long-term display features one of Gilliam’s Beveled-Edge paintings, titled Spread (1973), a series that he began in 1967. Also exhibited are two of his Drape paintings, both titled Carousel II (1969), which are suspended in concert with one another to form Double Carousel Merge, a large-scale canvas installation hung from the ceiling. With the pioneering Drape paintings, Gilliam shifted his canvases from the frame and wall to three-dimensional space, imparting a sculptural quality to the installations and allowing them to become site-responsive. Unique to each space, the soft folds of canvas may not be draped the same way twice.