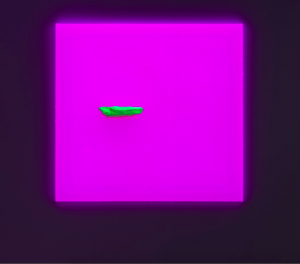 Dia Art Foundation presents an exhibition of new work by Jacqueline Humphries, which opens this summer at the Dan Flavin Art Institute in Bridgehampton, New York. Throughout a three-decade-long career, Humphries has tested the limits of abstract painting. Since 2005 the artist has explored the effects of ultraviolet light on pigments, creating a body of work specifically intended to be viewed under these conditions. With these black light paintings, Humphries resignifies a medium more associated with psychedelic art and 1960s counterculture than the avant-garde. Dia’s presentation introduces works that have been created specifically for its Bridgehampton space.

Moving into a sculptural dimension, this significant new exploration brings a grouping of fluorescent cast objects under black light. The casts were made using various sources both natural and man-made: paintings; found plywood and driftwood; and 3D-printed driftwood and seashells. Cast in resin, each object retains a high level of detail and is painted such that the works’ surfaces range in tone from ghostlike transparency to brilliant and opaque monochrome. Varying in scale, this body of work signals a departure from the limitations of two-dimensional space. Humphries’s casts are installed throughout the space—some freestanding and others situated on the wall.