di Rosa Center for Contemporary Art showcases the work of Viola Frey and its own significant collection of Northern California art in two exhibitions in 2019: Viola Frey: Center Stage marks the artist’s first major institutional survey on the West Coast since 1981 and includes more than 120 works of art, offering a fresh take on Frey’s prolific and influential practice. On view also, Building a Different Model: Selections from the di Rosa Collection, curated by New York-based Dan Nadel, is the first in a series of exhibitions exploring di Rosa’s remarkable holdings of Northern California art, organized by guest curators from beyond the Bay Area. 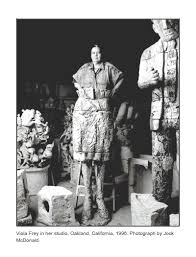 Spanning four decades, from 1963 to 2002, Viola Frey: Center Stage is the largest presentation of Frey’s work to date, coming at a moment of renewed interest in, and critical attention to, the medium of ceramics. In addition to the larger-than-life figurative ceramic sculptures for which the artist is renowned, the show includes pieces in a range of media that have either never or seldom been seen, and are thus completely unknown to an entire generation.

Among the pivotal large-scale works included are China Goddess Group (ca. 1979–81), one of the artist’s first forays into monumentality, and The Decline and Fall of Western Civilization(1992), the most ambitious sculpture of her career. Also on view are more intimate bricolages from the 1960s and 1970s, including a re-creation of the experimental Desert Toysinstallation (ca. 1975–77), and several large-scale paintings, works on paper, bronzes, and functional ceramics, all of which invite close study of their surfaces, materials, and technical mastery.

The exhibition occupies di Rosa’s 8,500-square-foot Gallery 2, marking the first time the gallery has been devoted to the work of a single artist. The exhibition draws from a mix of di Rosa’s extensive holdings, generous loans from Artists’ Legacy Foundation, and private collections.

“Frey’s wide-ranging interests—from identity to class, culture, consumerism, and environmental issues, with an undeniable undercurrent of a feminist statement—parallel many of the pressing issues of our day,” observes curator Amy Owen. “This presentation is a long-overdue look at an artist working far ahead of her time.”

This is the first of three major solo exhibitions at di Rosa, rolling out over 2019 and 2020, focusing on singular artistic voices in Northern California art history. Exhibitions in 2020 will feature the work of Jean Conner and Deborah Remington. The series shines a light on the artists’ years living and working in the Bay Area, highlighting their shared impulse to draw inspiration from the personal, cultural, and environmental realms, and how critical aspects of the region enabled their work to develop and flourish. Their distinct approaches to art making and their strong, independent spirits demonstrate an approach to feminism rooted in lived experience and unshakable determination.

Viola Frey was born in Lodi, California, in 1933, and died in Oakland in 2004. She received her BFA and an honorary doctorate from California College of Arts and Crafts and attended graduate school at Tulane University. She was awarded two National Endowment for the Arts Fellowships, the Award of Honor in Sculpture from the San Francisco Arts Commission, and many other grants and awards. Her work is in numerous public and private collections worldwide.

This exhibition is curated by Amy Owen in conjunction with the Artists’ Legacy Foundation, Oakland.

Building a Different Model: Selections from the di Rosa Collection is the first in a series of exhibitions exploring di Rosa’s remarkable holdings of Northern California art, organized by guest curators from beyond the Bay Area.

“One of the great strengths of postwar Northern California painting and sculpture is the collective reimagining of what art and the world can be,” says di Rosa Executive Director Robert Sain. “The di Rosa collection offers a vision apart from most art histories, one led by individual sensibilities focused on building languages of communication and community.”

Curated by Dan Nadel, some 70 works by 40 artists in Building a Different Model address the world through generative visions of transformation and repair through social, physical, and ceremonial relationships. Carlos Villa and K. Lee Manuel made garments-as-art or ceremonial garb; Norman Stiegelmeyer and Robert Bechtle offer visions of psychic shifts; paintings by William Theophilus Brown, Irene Pijoan, Oliver Lee Jackson, and Joan Brown catch their subjects on the cusp of social change. Exhibited here for the first time are 12 collaborative drawings by William Allan and friends William T. Wiley, Robert Hudson, Robert Nelson, and Bill Geis, which were made for Dorothy Wiley and Gunvor Nelson’s 70-minute film Five Artists: BillBobBillBillBob (1971) about those artists and their families. These and a handful of related drawings memorialize the ethos documented in the film and remain a powerful example of the collaborative, community-based art and life that found fertile ground at di Rosa itself.

“I selected works that surprised me and might surprise a visitor based on our knowledge of the art and artists,” said Nadel. He wanted to show extra dimensions of each artist, when possible, and bring to the fore artists who are known in the Bay Area but not much outside of it, like Oliver Lee Jackson and Carlos Villa. “It was important to me that this not be another show of ‘the usual gang’ or ‘funk art,’” he says.

Nadel focuses on the idea of “repair,” guided by two works by Bill Allan and William T. Wiley that appeared in the 1969 Repair Show at Berkeley Gallery: Indian History Repair (1969) and Repair for Super Natural Events and Natural Events (1969). The theme, repairing ourselves and our communities, is emphasized through collaboration (thus the 12 collaborative drawings), ritual (Carlos Villa), spiritual awareness (Stiegelmeyer, Bechtle, Pijoan, H.C. Westermann, Gage Taylor, James Melchert) and art made for the sake of demonstrating new ways to think about life and the land around us (Allan’s Rome painting, Paul Kos’s drawings). Nadel hopes visitors will come away with a sense that art can be transformative, and that these artists were working with the intent to demonstrate its potential for personal and communal revelation.