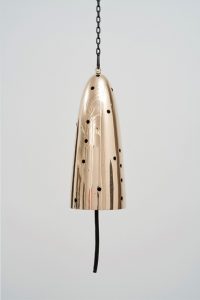 Although di Rosa Center for Contemporary Art’s exhibition space is closed, you can view a virtual tour of the exhibition online.

Davina Semo’s exhibition Core Reflections marks one of two inaugural projects in di Rosa’s Conversation Pieces series. The San Francisco-based artist works across two and three dimensions, often utilizing industrial materials that examine tensions between nature, society and the self. Her project for di Rosa considers the unique setting of Gallery 1 in relation to the landscape as well as its siting as a point of public assembly. Semo’s past works have looked to the urban environment for inspiration, much like key Beat era funk artists such as Bruce Conner, Wally Hedrick, George Herms, and Jay DeFeo, among others, that found potential in the overlooked, abject materials of the everyday, and defined the rise of Northern California assemblage in sculpture and collage of the 1950s and 1960s.

Semo’s commission for di Rosa inverts this lens by drawing on the surrounding industrial architecture of the gallery space amidst the expansiveness of the natural Northern California terrain just outside. Building on her more recent series of wall based works and suspended wax cast bronze bells that both invite and implicate the viewer through their highly polished reflective surfaces, Semo’s commission highlights the porous confines of di Rosa’s glass encased exhibition space, offering up a moment for viewers to examine themselves within the uncertainty of exterior forces.

Recent travels to Greece have inspired the artist’s emphasis on the Gallery 1 platform as an entry point for the viewer, conjuring the concept of the ancient agora, or an open public gathering space. Within this, we encounter a number of Semo’s substantial bells which hang by a variety of industrial grade chains, inviting viewers to walk around their forms and engage in their utility as instruments for expressing a call to attention. Two sets of wall-based works surround the gallery space: one continuing the artist’s explorations of warped, luminous surfaces that recall domestic mirrors, and in turn, our own visages; and the other, an entirely new exploration of acrylic and woven metal mesh substrates tethered with 3D printed casts of the sensuous skyfruit mahogany seed pod.

Taken as a whole, Semo’s assembly of works for di Rosa creates a subtle yet ecstatic mode of corporeal engagement by prompting a reevaluation of our contemporary mindset ruled by anxieties and unease. Core Reflections invites sustained moments of introspection and contemplation within the permeable precipice of built and organic space.

Davina Semo (b. 1981, Washington, DC) earned her BA at Brown University in 2003 and her MFA from the University of California, San Diego in 2006. Semo has shown extensively throughout the United States and Europe, including solo exhibitions at Jessica Silverman Gallery (San Francisco) and Marlborough Chelsea (New York). Group exhibitions include Hair and Skin at Derek Eller Gallery (New York), TOUCHPIECE at Hannah Hoffman Gallery (Los Angeles) and Show Me as I Want to Be Seen at The Contemporary Jewish Museum (San Francisco). Davina Semo lives and works in San Francisco, CA. Semo is represented by Jessica Silverman Gallery (San Francisco), Marlborough Gallery (New York), and Ribordy Thetaz (Geneva).